Murder on the Menu by Zanna Mackenzie - Guest Post 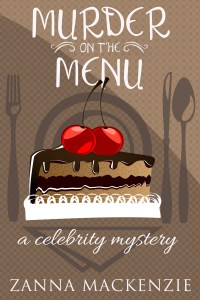 Synopsis:
After Lizzie’s new boss, celebrity chef Armand, is stabbed in his own kitchen, Lizzie finds herself at the top of the suspect list.

Determined to clear her name she’s forced to enlist the services of her new neighbour, Celebrity Crimes Investigation Agency (CCIA) special agent Jack Mathis, who’s been suspended from his duties for reasons unknown.

Can Lizzie save herself from getting arrested and manage to resist her special agent sidekick’s considerable charms and gorgeous smile? Will they solve the culinary murder mystery or will she end up in a prison cell?

About the author:
I write romantic comedy mysteries and when I’m not writing I can be found gardening (trying to grow tomatoes in the British climate is a major challenge!) walking the dogs or reading.

I’m a former therapist, a fan of the great outdoors – especially Scotland, the Lake District and Derbyshire’s Peak district – and also something of a dreamer!

Home is a village on the Derbyshire / Leicestershire border in the UK with my husband, our 4 Labrador dogs, a vegetable patch that’s home to far too many weeds and an ever expanding library of books waiting to be read.

At every opportunity I can be found scribbling down notes on scenes for whatever novel I’m working on and I love it when the characters in my work in progress novels take on minds of their own and start deviating from the original plot!

Guest Post:
What Makes A Good Heroine In A Novel?

Have you ever started to read a book and found you couldn’t finish it because you disliked the heroine so much? What was it about her that you disliked? Did she complain endlessly and not take any actions to solve her problems? Was she too materialistic or simply too wishy-washy? Maybe she was loud and annoying or too shy and mousy? Now, what about the flip side? What was it about heroines in books that you’ve liked? Maybe she was a little flirty? Perhaps she had a wicked sense of humour? Was it her determination in the face of adversity that drew you to liking her?

Our taste in book heroines is as varied as our taste in friends so what one person finds utterly irritating, another might love, and vice versa.

I think the key is whether or not you can relate to the lead female character in a book you are reading. Can you identify with her problems, whatever they are – a job she hates, a fraught relationship with her mum, a lack of romance in her life, or maybe all three! Of course, with a mystery, there’s the added complication of tracking down a murderer, stolen items or a stalker. Which means a heroine in a mystery novel usually has a lot to get to grips with!

One thing is for sure, wherever she lives, whatever job she does, whatever her current dilemma, she HAS to be likeable. Most of us, I think, probably prefer to read about a heroine who is feisty, capable, a modern, independent woman looking to get sleuthing and help put the villain behind bars. Personally speaking, I like an element of romance in a mystery novel too (the books I write are romantic comedy cozy mysteries) and I want to follow the heroine in her search for the right man for her, as well as her search for justice.

Critically, she also has to be flawed in some way, have some element of vulnerability, so she endears herself to us. She could have been emotionally hurt in the past and is scared to get involved again. Maybe she simply hasn’t got a clue what she wants in life and is trying to sort herself out –we’ve all been there!

Our amateur sleuth could be a perfectly coiffed city girl in designer shoes with a penchant for expensive handbags. She could be a country girl who lives in jeans and boots and wouldn’t know a designer dress from a high street one. It doesn’t matter, we just need to like her and want to hear her story.

In Murder On The Menu (Book 1 in my Celebrity mystery series) Lizzie ends up doing a complete about turn. She was a city girl with a great career and a steady boyfriend but then it all fell apart and she found herself living in the middle of nowhere and waitressing to make ends meet. Despite all the issues in her life, Lizzie is feisty and determined to get things back on track. Unfortunately, fate has other ideas and when her creepy celebrity chef boss is stabbed one night in the restaurant kitchen, the police have Lizzie at the top of the list of suspects. Yikes! Looks like Lizzie still has plenty more challenges to tackle. Enlisting the help of her gorgeous new neighbour Jack, who claims he’s some kind of special agent on enforced leave, might not be her best idea yet, but Lizzie’s prepared to do whatever it takes to save herself from landing in jail when she’s perfectly innocent.

At the end of the day, I think we just want to read about a heroine we can identify with, that we can imagine ourselves being friends with, can understand her motives and are rooting for to ‘get her man’.

What do you think? I’d love to know!