A Cast for Murder by Jeanne Quigley - Review 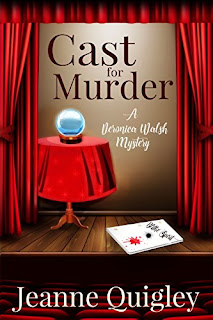 Book description
Former soap opera actress Veronica Walsh is recovering from her first holiday season in the retail world when she is pulled from retirement to star in a community production of Blithe Spirit. Delighted to play the part of a medium, Veronica must soon also assume the role of amateur sleuth when she finds the play’s director shot dead behind the theater.

Teaming with stage manager Sophie Morrissey, Veronica’s hunt for clues to the murder of Gigi Swanson leads her to a cast of colorful behind-the-scenes characters and a stunning Act Three finale. Will it be a triumph for Veronica, or will the curtain close on more than her career?

Meet the author - Jeanne Quigley
Jeanne Quigley grew up reading mysteries, watching soap operas, and vacationing in the Adirondacks, never imagining these pleasures would be the foundation of her debut novel. Her love of characters-real and fictional-led her to study Sociology and English at the University of Notre Dame. Jeanne has never been a soap star, but she has worked in the music industry and for an education publisher. She lives in Rockland County, New York.

My thoughts
Well Veronica has gone and done it again and got herself mixed up in another mystery. She just keeps getting stuck in helping out.  I liked how the author kept me guessing with the twists and turns. The characters worked very well together and I think that may have been where the twists were coming in for me. Just when I thought I liked someone something was brought up that made me change my mind. It is also nice to see Veronica and Mark have a relationship that keeps growing throughout this series. This was a fast paced read for me and very enjoyable. I wonder what Veronica will be up to next time.
Posted by Angela - Bookaunt at Tuesday, February 13, 2018