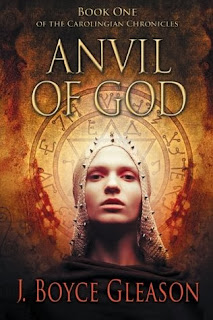 Synopsis: It is 741. After subduing the pagan religions in the east, halting the march of Islam in the west, and conquering the continent for the Merovingian kings, mayor of the palace Charles the Hammer has one final ambition-the throne. Only one thing stands in his way-he is dying.
Charles cobbles together a plan to divide the kingdom among his three sons, betroth his daughter to a Lombard prince to secure his southern border, and keep the Church unified behind them through his friend Bishop Boniface. Despite his best efforts, the only thing to reign after Charles's death is chaos. His daughter has no intention of marrying anyone, let alone a Lombard prince. His two eldest sons question the rights of their younger pagan stepbrother, and the Church demands a steep price for their support. Son battles son, Christianity battles paganism, and Charles's daughter flees his court for an enemy's love.Based on a true story, Anvil of God is a whirlwind of love, honor, sacrifice, and betrayal that follows a bereaved family's relentless quest for power and destiny.

My review: I have not read anything about this time period before and was a little leary about it - in fact I read what this book was about more than once before I decided to read the book and I was not in the least bit disappointed with it. This is my first book by this author and I have to say that I am impressed. The book itself was very interesting to me. I thought the author did a good job with developing the characters so you could get a real sense of who they are/were. Also for me I really enjoyed the historical detail that was used which to me helped me understand the time period and such. If you like books with religion, action, drama, history, a little romance and so much more than this book is for you. I look forward to the next book in this series.

About the AuthorAfter a 25-year career in crisis management and public affairs, J. Boyce Gleason began writing historical fiction and is publishing his first novel ANVIL OF GOD, Book One of the Carolingian Chronicles.  With an AB in history from Dartmouth College, Gleason brings a strong understanding of the past to his historical fiction.  He is married, has three sons and lives in Virginia.For more information please visit www.jboycegleason.com.