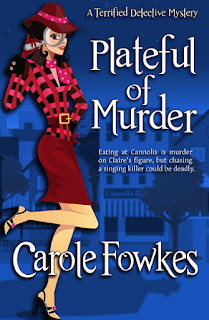 Synopsis:
Private Detective Claire DeNardo is afraid of everything. Simple things like balloons, roller coasters, and hairpieces make her knees knock loud enough to be a band’s rhythm section. Unfortunately, the only job Claire can find is working for her Uncle Gino in his seedy detective agency. Until now, her cases have all been middle-aged men with trophy wives who needed watching. But Claire gets swept up in a murder case despite being afraid of conflict, bodily harm, and hurting anyone’s feelings. She enlists a jaded security guard, Ed, to help her. But when Ed is attacked and left comatose, Claire must stumble along by herself. Both the client who hired her and the handsome police detective want her off the case. When the wrong person is charged, it’s up to the terrified detective, to summon all the courage she can to find the true killer.

About the author:
Carole Fowkes is the author of the cozy mystery series, “The Terrified Detective.” She has also had stories in a number of “Chicken Soup for the Soul” books and other similar anthologies. She’s a registered nurse and lives with her husband in Dallas, Texas.

A number of readers have told me they really like the character, Lena Antonucci, Claire’s aunt in the “Terrified Detective Mystery” series. What they may not realize is that many families have an Aunt Lena. In my own, she was my mother, and to my cousins, Aunt Mary. In fact, that’s who Aunt Lena is based on.

I took many memories of my mother and created Lena. For example, although my mother didn’t own a bakery, she loved to bake. Growing up, I would often come home to the tantalizing aroma of just baked bread. Whenever I’d see her hard at work, kneading, stretching or mixing, I knew something amazing would be the result. Don’t even get me started on her banana cream pie. My taste buds will demand an explanation as to why they aren’t enjoying a slice at this very moment.

Something else with which I imbued Lena is her ability to boldly give her unique interpretations of the world and people in it, even if these conclusions make little or no sense to anybody else. This quality in Aunt Lena often comes through when she discusses romance with Claire. My mother’s spin on things often showed up in discussing medical issues. For instance, I remember the time my mother told me her sister, my Aunt Angie, was having stomach troubles and had an x-ray to determine the problem. My mother explained calmly that my aunt had “Abdullah in her stomach.” I’m a registered nurse and I knew my aunt had not eaten someone so I was able to deduce she meant my aunt had a duodenal ulcer. When I told my mother this, she said, “The doctor said you could pronounce it two ways.” I assured her, that didn’t include Abdullah.

I think my favorite malapropism, which I called momapropism, was the time she explained what happened when my cousin’s husband, John, went to the doctor for a problem with his back. She insisted the physician removed his patient’s entire spine. I wondered if my cousin used a wheelbarrow to bring her husband home. In case you’re wondering…the doctor excised a large mole on John’s back.

Another area in which Lena is like my mother is, pride in her heritage. Both women were happily married to Italian men and believe every Italian American woman should do the same. In “Plateful of Murder” one of the first questions Lena asks Claire about a potential beau is if he’s Italian. Of course, she wants what’s best for Claire. In her eyes, that’s a nice Italian boy. Although my mother was glad when I married my English/Slovak husband she would have been even happier if his family had come from the sunlit Italy.

There’s no use saying Aunt Lena can’t be wrong. She is, and often. She says things she shouldn’t and she butts in sometimes where she’s not needed. But Claire knows, even when Aunt Lena is sticking her nose where it shouldn’t be, or saying something she shouldn’t, if you were to dig deeper than Lena’s words, you’d find concern for her family and love.

Lena Antonucci, like my mother, is indeed an interesting character. But what most likely makes readers have affection for her is that part of Lena and my mother so dear to me. A heart large and flexible enough to wrap others in its warmth. And a spirit generous enough to make others feel welcome.

Giveaway:
This giveaway is for one print or e-copy of A Plateful of Murder. The giveaway is open to the US only. Once the winner is randomly chosen they will be notified via email and have 24 hours to reply or a new winner will be chosen. One requirement is to leave a comment on the post and this will be verified. If no comment is left you will be disqualified. Thank you and good luck.
a Rafflecopter giveaway

March 8 – Cozy Up With Kathy – INTERVIEW