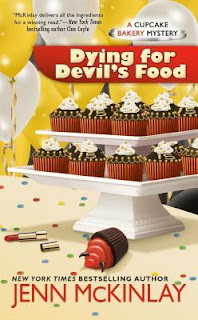 Book description
It's going to take every recipe the Fairy Tale Cupcake crew has to whip up a quick defense for Mel Cooper when her high school reunion goes from a cakewalk to a car wreck...

Melanie Cooper has zero interest in catering her fifteen-year high school reunion, but Angie insists it's only right that they bask in the success of Fairy Tale Cupcakes--and Mel's engagement to the delicious Joe DeLaura is the cherry on top!

Everything is going better than expected until Cassidy Havers, resident mean girl and Mel's high school nemesis, picks a fight. No longer willing to put up with Cassidy's bullying, Mel is ready to tell the former homecoming queen to shut her piehole and call it a night. But as Mel and Joe prepare to depart, Cassidy is found dead in the girl's bathroom, next to a note written in lipstick that points right to Mel -- making her the prime suspect.

Now, Mel must follow the clues to find the real killer and keep her reputation from being frosted for a crime she didn't commit.

Meet the author - Jenn McKinlay
Jenn McKinlay, the New York Times bestselling author of the Cupcake Bakery Mysteries (including Wedding Cake Crumble, Caramel Crush, and Vanilla Beaned), has baked and frosted cupcakes into the shapes of cats, mice, and outer-space aliens, to name just a few. Writing a mystery series based on one of her favorite food groups (dessert) is as enjoyable as licking the beaters, and she can't wait to whip up the next one. She is also the author of the Hat Shop Mysteries, the Library Lover's Mysteries, the Bluff Point contemporary romances, and the Happily Ever After contemporary romances. She lives in Scottsdale, Arizona, with her family.

My thoughts
Jenn has hit it out of the park again with another addition to one of my favorite cozy mystery series. I had to agree with Mel I would not have wanted to go to her class reunion either, but she can't tell her best friend no. So she goes and the mean girl is still a mean girl. I have to say I felt a little like karma got her when she ended up murdered. I was glad that Mel's friends rallied around her when she was accused of murder and everyone had a little part in helping solve this case. I did like that there was an unexpected new friend to Mel towards the end. I don't want to say more and ruin it. I love this series.
Posted by Angela - Bookaunt at Thursday, September 12, 2019