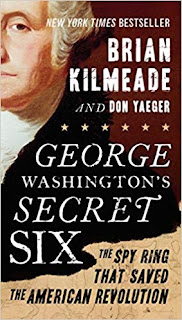 Book description
When George Washington beat a hasty retreat from New York City in August 1776, many thought the American Revolution might soon be over. Instead, Washington rallied—thanks in large part to a little-known, top-secret group called the Culper Spy Ring. He realized that he couldn’t defeat the British with military might, so he recruited a sophisticated and deeply secretive intelligence network to infiltrate New York.

Drawing on extensive research, Brian Kilmeade and Don Yaeger have offered fascinating portraits of these spies: a reserved Quaker merchant, a tavern keeper, a brash young longshoreman, a curmudgeonly Long Island bachelor, a coffeehouse owner, and a mysterious woman. Long unrecognized, the secret six are finally receiving their due among the pantheon of American heroes.

My thoughts
I really enjoyed this book and thought the author did a good job.  It did not read like a normal history book it read like a novel.  The author's attention to detail added to the story for me.  He also gave some good theories on #355 that made sense.  I will be looking for more books by these authors.
Posted by Angela - Bookaunt at Monday, October 21, 2019