A Glimmer of a Clue by Daryl Wood Gerber - Review 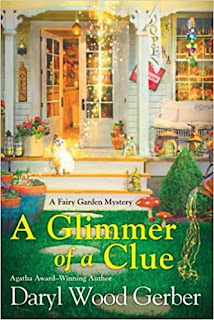 I received this book free from the author. All opinions are my own.
Book details
Fairy Garden Mystery #2
Publisher ‏ : ‎ Kensington (June 29, 2021)
Paperback ‏ : ‎ 336 pages
ISBN-10 ‏ : ‎ 1496726367
ISBN-13 ‏ : ‎ 978-1496726360
About the book
When Courtney's friend Wanda gets into a ponytail-pulling wrestling match in public with a nasty local art critic, Courtney stops the fight with the help of a garden hose. But Lana Lamar has a talent for escalating things and creating tension, which she succeeds in doing by threatening a lawsuit, getting into yet another scuffle--in the midst of an elegant fundraiser, no less--and lobbing insults around like pickleballs.

Next thing Courtney knows, Lana is on the floor, stabbed with a decorative letter opener from one of Courtney's fairy gardens, and Wanda is standing by asking "What have I done?" But the answer may not be as obvious as it seems, since Wanda is prone to sleepwalking and appears to be in a daze. Could she have risen from her nap and committed murder while unconscious? Or is the guilty party someone else Lana's ticked off, like her long-suffering husband? To find out, Courtney will have to dig up some dirt.
Meet the author - Daryl Wood Gerber
Daryl Wood Gerber is the Agatha Award-winning, nationally bestselling author of the Fairy Garden Mysteries, the French Bistro Mysteries, and the Cookbook Nook Mysteries, as well as the Cheese Shop Mysteries written under the name Avery Aames. She also writes standalone suspense novels and the Aspen Adams Novels of Suspense. Prior to her career as a novelist, she was an actress with roles in television shows including "Murder, She Wrote," and she wrote for the popular TV sitcom "Out of this World." Originally from the Bay Area, she now lives in Southern California where she likes to cook, garden and spend time with her frisky Goldendoodle named Sparky. Visit her online at DarylWoodGerber.com.
My thoughts
I enjoyed this book.  I like how Fiona helps with solving the crime and as she does her wings grow.  Detective Summers is nice enough to let Courtney help with solving the crimes. I know he does not like to but he knows he can't stop her and she does come up with things that he and his team do not. It is fun to visit Carmel and see all of your friends and catch up with them. The fairy theme is so cute and makes me want to creat my own fairy garden. I look forward to the next one.
Posted by Angela - Bookaunt at Wednesday, July 28, 2021