Rosemary and Crime by Gail Oust 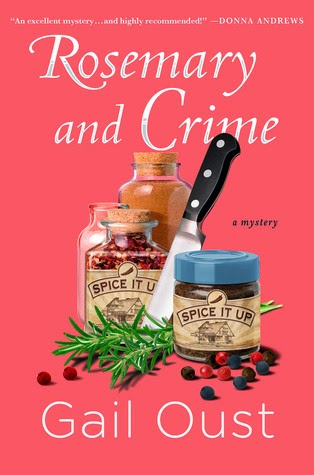 Piper Prescott, a transplanted Yankee living in the South, has got her sass back.  She might be down, but don’t count her out.  “Change of life?” she asks.  Bring it on.  Recently divorced, Piper decides to pursue a dream she’s secretly harbored: owning her own business, Spice it Up!, a spice shop in her adopted hometown, Brandywine Creek, Georgia.  But Piper’s grand opening goes awry when the local chef who’s agreed to do a cooking demo is found stabbed.  Not only did Piper find the body, she handled the murder weapon and doesn’t have a witness to her alibi, making the case look like a slam dunk to brand new police Chief Wyatt McBride.  Desperate to uncover the truth—and prove her innocence—Piper enlists the help of her outspoken BFF Reba Mae Johnson to help track down the real culprit.  The pair compile a lengthy list of suspects and work to eliminate them using their own creative brand of sleuthing techniques including stakeouts, breaking and entering, and one very unorthodox chocolate pie. When Piper narrowly avoids being a victim of a hit-and-run, she knows she’s getting closer to the truth, but can she catch the killer and clear her name before she becomes the next victim?
My review: This was my first book I have read by this author and I enjoyed this story. It was a very cute story. I had a hard time picking out who the person was who "did it" as there were many that were suspects. I have to say the book moved right along and was a quick read for me. I also like that this story was a cooking themed mystery it made it fun for me to read. A nice fun weekend read.

Be sure to check out the rest of the stops on the tour: