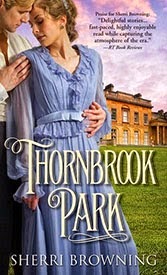 Synopsis: In a world poised for epic change...

Disowned for marrying beneath her, Eve Kendal has returned to England destitute after her husband's death and the mysterious disappearance of their savings. She's looking for survival, not romance. But from London to the Yorkshire countryside to the elegant estate of Thornbrook Park, Eve's path seems destined to cross that of the dashing but violent Captain Marcus Thorne.
Anything can happen...


For Marcus, a return home means facing the demons that drove him to war in the first place. As he and Eve begin a steamy affair, tensions that had been simmering just beneath the surface threaten to explode and shake the very foundations of Thornbrook Park.

My review: I can't not say enough good things about this book. The first thing I want to say is a big thank you to the author for giving me the chance to read this book, I have found a new favorite author to add to my list. When you first look at this book you might think it is a romance book, but it is so much more than that. There is the romance which was fun to read but also there was a mystery in this story that I was not expecting and had me not wanting to put the book down. This book was so well written that I can't wait for the next book in the series. Eve and Marcus were such good characters and shall we say made for each other, but there were some supporting characters that I came to love as well - like Agatha, Brandon, Tom and Mrs. Dennehy. Now Sophia and Gabriel had me wanting to just slap them. To me Lady Alice seems like an interesting sort and I hope to read more about her in later books. This will be series that I will be waiting for each book to come out faster than it does.
Posted by Angela - Bookaunt at Sunday, June 15, 2014