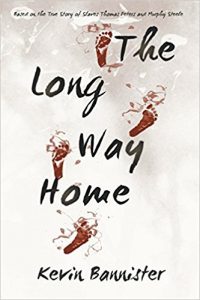 About the book
Set in the turbulent times of the War of Independence, ‘The Long Way Home’ follows the lives of Thomas Peters and Murphy Steele who are friends, former slaves, fellows-in-arms and leaders of the Black Brigade. Their real-life story is an epic adventure tale as they battle bounty hunters, racism, poverty and epidemic in their adopted country after the war.

‘The Long Way Home’ has resonated with readers around the world as an unforgettable account of courage, hope and determination triumphing over despair and injustice. Thomas Peters, thoughtful and charismatic, and Murphy Steele, strong and impulsive, lead their followers on an inspirational search for a place where they can be free.

Reviews:
“The author has written about such a sensitive topic and in a very beautiful way. The reader will become immersed in a reality that may seem too distant, but written in a language that conjures very vivid images, a tale that will speak to the hearts of readers with eloquence. Bannister has successfully combined historical facts with glowing imagination to deliver a masterpiece that will be well received by lovers of historical fiction. His language succinctly portrays the world of a slave and the injustices prevalent in that world.”–Romuald Dzemo, author of Courage To Embrace Yourself and You Can’t Be A Failure

“Kevin Bannister’s Long Way Home is a novel that grabs your attention from the start and keeps you riveted to the last word. . It is written around an era where the life of an Indigenous North American, and a person of African roots, were deemed by Caucasians to be easily expendable and not a thing to trouble a conscience. It highlights in great detail the fact that when greed and self interest came to the forefront during the American Revolution that Caucasian brothers had no compulsion about inflicting unspeakable barbarities upon each other. An unforgettable read!”–Dr. Daniel N. Paul, C.M., O.N.S., LLD, DLIT, Mi’kmaw eldering, author of We Were Not The Savages, Order of Canada recipient, journalist and lecturer, www.danielpaul.com

Meet the author - Kevin Bannister
Kevin Bannister is a rancher living in the beautiful foothills of central Alberta. He would like Thomas Peters and Murphy Steele to be celebrated as the heroes that they were in their lifetimes and to be inspirations to young people everywhere to persevere in the face of bigotry, poverty, government indifference or any other adversity.

Connect with Kevin on Goodreads.

What did I think of this book:
I thought this book was a very thought provoking adventure. It would be hard to imagine what these guys had to go through. Trying to find a better way of life only to be thrown back into a place again. The author did a good job of developing the characters which were actual real people and what they went through trying to find freedom. He really did his research and it comes out in the details. There are times you are on the edge of your seat hoping that Thomas and Murphy can just escape the dangers of their journey. The writing style for me also flowed off the pages. I also enjoyed meeting some of the other people who joined them in their journey. If you are looking for a good historical fiction book that tells a story that many do not venture into then I suggest this book. I will be watching for more books by this author.

Friday, September 1st: What Is That Book About?