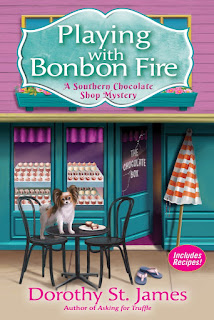 Book description
Chocoholic Charity Penn must smoke out the killer to stop her newly inherited beachside chocolate shop from going up in flames in Dorothy St. James’ decadent follow-up to Asking for Truffle.

Chocolate shop owner Charity Penn is finally settling into life in the quirky South Carolina seaside town of Camellia Beach cooking up chocolate treats. She’s even helped organize the town’s lively beach music festival which has brought rollicking crowds eager to dance the Carolina shag. That is, until one of the band’s lead singers is found dead beside a beach bonfire.

While also trying to balance the amorous attention of music star Bixby Lewis, in town for the festival, and her quest to perfect a new hot flavored bonbon, Charity dives into the investigation. Though it’s more spice than sugar when she discovers a threatening note, comes across decades of age-old secrets, and Bixby comes into the line of fire when a gas grill explodes on the deck of a beachfront house.

Now Charity must turn up the heat and catch the killer before her chance melts away in Playing With Bonbon Fire, the delightful second Southern Chocolate Shop mystery served up just right for fans of JoAnna Carl and Joanne Fluke.


Meet the author - Dorothy St. James
Mystery author Dorothy St. James was born in New York but raised in South Carolina. She makes her home on an artsy island community in South Carolina with her husband, a neurotic dog, and fluffy cat. Though writing has always been a passion for her, she pursued an undergraduate degree in Wildlife Biology and a graduate degree in Public Administration and Urban Planning. She put her educational experience to use, having worked in all branches and all levels of government including local, regional, state, and federal. She even spent time during college working for a non-profit environmental watchdog organization.

Switching from government service and community planning to fiction writing wasn’t as big of a change as some might think. Her government work was all about the stories of the people and the places where they live. As an urban planner, Dorothy loved telling the stories of the people she met. And from that, her desire to tell the tales that were so alive in her heart grew until she could not ignore it any longer. In 2001, she took a leap of faith and pursued her dream of writing fiction full-time.

, Dorothy is going back to her roots and setting a mystery series in a Southern beach town much like the one she’s called home for the past 20 years. The Southern Chocolate Shop Mysteries

combine her love of fine chocolates, quirky Southern charm, with a dash of danger.

Guest post
It’s Okay to Bite the Hand that Feeds You
By Stella, Penn’s rescue papillon
I might only be five pounds, but I’m a fearsome little thing. People back up when they see me coming. I like that. It sure beats being accidentally stepped on. So perhaps I bite first and make friends later. And of course I bark to warn everyone around me that something is bothering me. My ears are as big as radar dishes, which means I have super good hearing. And although I’m small, my canine nose is as sensitive as a bloodhound’s. I can smell trouble a mile away.

My owner, Penn, is nice. But she doesn’t listen to me like she should, so I bark and nip her fingers to get her attention or to stop her from doing something I don’t like. Don’t get me wrong. I love her. She gives me bacon. Lots of bacon.

Penn lives with a kindly older lady, Bertie Bays. Bertie is an expert in the kitchen and the one who cooks up all that yummy bacon. <<Bacon? Bacon? Where’s the bacon? What? There’s no bacon. Let me bark for a little while. Yum. Yum. Yum. Ah, Penn just gave me TWO pieces of bacon.>> Where was I? Oh, right. Bertie. I never nip at her even though she’s owned by a cheeky cat who thinks he owns the place. Bertie listens. Like me, she hears things that no one realizes she hears.

There are two men in Penn’s life right now. Harley Dalton. He’s a big guy. Thanks to my bold personality, he has a healthy fear of me. I like that about him. Even so, I try to give him a little nip or two every time he comes around as a reminder that he needs to take care around me. Besides, I don’t like how he smells. His scent isn’t all soft and flowery like Penn’s or Bertie’s. It’s hard. Earthy. Yeah, I’m definitely biting him the next time I see him.

Penn has also been hanging around with this new guy, Bixby Lewis. That one makes her act goofy. I don’t like it when she acts goofy. Makes me feel all insecure and bitey. Although…the sight of Bixby’s expressive brown eyes and handsome face makes me want to act goofy too.

Penn doesn’t realize it, but I’m the best thing that has ever happened to her. I remind her to take care. Without me, she might not realize what a dangerous world it is out there. My little nips and growls and barks keep her safe. She should give me more bacon.

Do you have a special dog in your life that does everything in her power to keep you safe? Stop by and tell us about her (or him.)