We Own the Sky by Luke Allnutt - Excerpt 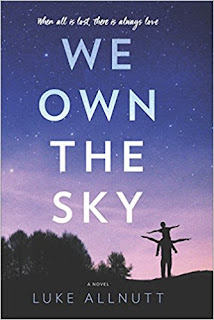 Book description
A triumphant story about love, loss and finding hope—against all odds

“We looked down at the cliff jutting into the sea, a rubber boat full of kids going under the arch, and then you started running and jumping through the grass, dodging the rabbit holes, shouting at the top of your voice, so I started chasing you, trying to catch you, and we were laughing so hard as we ran and ran, kicking up rainbow showers in the leaves.”

Rob Coates feels like he’s won the lottery of life. There is Anna, his incredible wife, their London town house and, most precious of all, Jack, their son, who makes every day an extraordinary adventure. But when a devastating illness befalls his family, Rob’s world begins to unravel. Suddenly finding himself alone, Rob seeks solace in photographing the skyscrapers and clifftops he and his son Jack used to visit. And just when it seems that all hope is lost, Rob embarks on the most unforgettable of journeys to find his way back to life, and forgiveness.

We Own the Sky is a tender, heartrending, but ultimately life-affirming novel that will resonate deeply with anyone who has suffered loss or experienced great love. With stunning eloquence and acumen, Luke Allnutt has penned a soaring debut and a true testament to the power of love, showing how even the most thoroughly broken heart can learn to beat again.

“A breathtaking read that describes perfectly the joy and pain that comes with loving fully and all the compassion and forgiveness it requires. Brimming with hope to the very end.” —Steven Rowley, bestselling author of Lily and the Octopus

“Anyone who wishes David Nicholls would write faster needs to grab this with both hands. It’s a truly stunning achievement.” —Jill Mansell, Meet Me at Beachcomber Bay

Meet the author - Luke Allnutt
Luke Allnutt grew up in the U.K. and lives and works in Prague.
.
Connect with Luke
Website | Twitter


Excerpt
That afternoon, I didn’t think I had ever seen Anna look more relaxed, more at home, her feet up on the coffee table, a can of Carlsberg in her hand. After that, we went to Rom­ford for every Christmas, our family traditions rejuvenated by Anna’s presence. She loved those traditions, the things she said she had never had. The midmorning sparkling wine and cer­emonial opening of the giant tin of chocolates. The pub for a pint while the turkey was cooking. The bingo. The party hats that Dad made us wear from dawn until dusk.

In the afternoon, Dad would get overemotional on the bub­bly and would tell me and Anna how much he loved us, how she was like the daughter he never had. And then, at almost exactly the same time every year, he would fall asleep on the sofa, just after the traditional sing-along of “Hey Jude” on the PlayStation Karaoke.

“We could all spend it together, my dad and your parents,” I said, putting my hand on Anna’s arm. “Although I can’t imag­ine your mother doing the karaoke.”

“Ha,” Anna said and suddenly she leaned over and kissed me, full on the lips, and I felt a wave of lust, a pent-up desire like that urge to fuck after funerals.

“Wow. Be careful, Anna. Definitely a public display of af­fection there.”

She sat back on her stool. “It’s the gin, I think. I’m being se­rious, though. I don’t want to come here for Christmas again. I know they’re my parents, but I don’t want that.” Anna low­ered her head, almost as if she was embarrassed by what she had said. “I missed you last night,” she said.

“In your teenage bedroom?”

“Yes. It made me feel quite randy actually.”

“Really? Well, I could always come to yours.”

“No,” Anna said quickly and then looked around her con­spiratorially. “But, I will come to you.”

I started laughing. “Are you drunk?”

She giggled. “A little actually. It’s the Christmas cheer. But seriously, Rob, I forbid you to come out of your room. It’s much easier for me. I know the times they fall asleep, you see. I know which floorboards squeak on the landing. I know how to close the door without making the latch click.”

“I’m not quite as square as you think, darling.”

“But what if we make a noise?” I said, half joking, happily buzzed from the beer.

I looked at her quizzically.

“I went to boarding school, Rob. I learned how not to make a noise.” She smiled at me mischievously and finally got the bartender’s attention.

“Could I possibly have another gin?”

We were a little drunk walking home. For safety, Anna made us walk, single file, facing the oncoming traffic. When cars approached, she pulled me into the shoulder to let them pass.

On the final stretch, there was a sidewalk and we strolled along arm in arm.

“Are you still coming to my room?” I said.

“Yes, of course. We have an agreement,” she said, almost solemnly. She then stopped, I thought for another car, but the road was empty.

“Maybe we should try…” she said.

“Really?” I said. We had never really spoken much about children. We were happy with our childless London lives: An­na’s career; Star Wars marathons and pop-up food festivals on the weekends. Boating in the park, museums on rainy days, lazy afternoons in pubs. It was the London life we had always imagined. A world with children was still in the distant future, a future that was no more real, or no more ours, than a future that would have us living in Peru.

I watched Anna whenever she was around children. She didn’t seem to coo and caw like other women. I saw her hold the baby of a friend once, and she cradled the infant so awk­wardly, like a careless Mary in a nativity play. After she had returned him to his mother, I saw her discreetly wipe some of the baby’s saliva on the back of her trousers.

“Yes, really,” Anna said, biting her lip nervously. “During lunch today, I was thinking about your dad and how much I love going there for Christmas. Just that warmth of being in a family. And I really want to have that as well, to make that my own.”

I pulled her close to me and kissed the top of her head. Loving Anna was like a secret that no one else knew. A secret you kept close to you, that you would never reveal. Because I was the only one, the only who that she let in. We stood like that for a while, on the side of the road, gently swaying in the moonlight.

I think we conceived that night, or perhaps the morning after when Anna’s parents were at church. A couple of weeks later, Anna called me into the bathroom. She was sitting on the side of the bath, examining, up close, in various angles of light, the clear blue line on the pregnancy test. I read the in­structions, to check that we were reading it right. Yes, it was really there, irrefutable, a thick blue stripe.

“I know,” Anna said. “Let’s not celebrate yet though. We still don’t know for certain.”

She saw my face drop and put her hand on my arm. “This brand, by the way,” she said, “has the lowest rate of false posi­tives on the market. I chose it precisely because of that.”

I didn’t say anything, and she put her arms around me and buried her face into my neck. “I just don’t want to get too ex­cited, okay?”

“Okay,” I said, and we stood and looked at the strip, the blue line now brighter and clearer than ever before.

it wasn’t the water, you said, that made the big hole in the rock. it was batman with his batarangs and his blaster. we looked down at the cliff jutting into the sea, a rubber boat full of kids going under the arch, and then you started running and jump­ing through the grass, dodging the rabbit holes, shouting at the top of your voice, so I started chasing you, trying to catch you, and we were laughing so hard as we ran and ran, kicking up rainbow showers in the leaves.