A Devil of a Duke by Madeline Hunter - Review 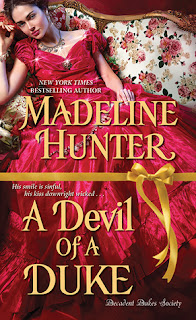 I received a copy of this book free from the author. All opinions are my own

HE MAY BE A DEVIL
He’s infamous, debaucherous, and known all over town for his complete disregard for scandal, and positively irresistible seductions. Gabriel St. James, Duke of Langford, is obscenely wealthy, jaw-droppingly handsome, and used to getting exactly what he wants. Until his attention is utterly captured by a woman who refuses to tell him her name, but can’t help surrendering to his touch . . .

BUT SHE’S NO ANGEL EITHER . . .
Amanda Waverly is living two lives—one respectable existence as secretary to an upstanding lady, and one far more dangerous battle of wits—and willpower—with the devilish Duke. Langford may be the most tempting man she’s ever met, but Amanda’s got her hands full trying to escape the world of high-society crime into which she was born. And if he figures out who she really is, their sizzling passion will suddenly boil over into a much higher stakes affair . . .

Meet the author - Madeline Hunter
Madeline Hunter is a New York Times bestselling author with more than six million copies of her books in print. She has twenty-nine nationally bestselling historical romances in print, including most recently, The Most Dangerous Duke in London, The Wicked Duke; Tall, Dark, and Wicked; and His Wicked Reputation. A member of RWA’s Honor Roll, she has won the RITA Award twice and been a finalist seven times. Her books have appeared on the bestseller lists of the New York Times, USA Today, and Publishers Weekly, and have been translated into thirteen languages. She has a PhD in art history, which she has taught at the university level. Madeline also writes the Romance Unlaced column for USAToday.com’s Happy Ever After site. Madeline loves to hear from her readers, and can be reached through her website at www.madelinehunter.com, on Facebook, www.facebook.com/madelinehunter/, and at twitter.com/madelinehunter.

My thoughts
I enjoyed going along on the journey with Gabriel and Amanda and getting to know them. I thought Amanda was a strong woman and liked how she does whatever she much to to help and protect her family. I also liked the historical aspect of this book. As always I thought the author's writing style was good and like her attention to detail. I am looking forward to the next book in this series to see who we get to know next.
Posted by Angela - Bookaunt at Friday, June 01, 2018