Warriors: Tigerstar and Sasha: Into the Woods by Erin Hunter - Review 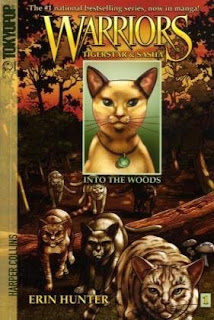 In the first book of the Tigerstar & Sasha manga arc, a kittypet named Sasha searches for a new home—and wonders if she might find it with ShadowClan and its leader, Tigerstar, during the events of the Warriors: The Prophecies Begin series.

When Sasha is forced to leave her kittypet home, she must forge a solitary new life in the forest. Life on her own is exciting at first but quickly gets lonely. Then Sasha meets Tigerstar, leader of ShadowClan, and wonders whether she would be better off joining the ranks of his forest Clan. But Tigerstar has many secrets, and Sasha isn’t sure she can trust him….

Meet the author - Erin Hunter
Erin Hunter is the pseudonym of five people: Kate Cary, Cherith Baldry, Tui T. Sutherland, Gillian Phillips, and Inbali Iserles, as well as editor Victoria Holmes. Together, they write the Warriors series as well as the Seekers and Survivors series. Erin Hunter is working on a new series now called Bravelands.

Erin Hunter is inspired by a love of cats and a fascination with the ferocity of the natural world. As well as having a great respect for nature in all its forms, Erin enjoys creating rich mythical explanations for animal behavior, shaped by her interest in astronomy and standing stones.

My thoughts
This was my first graphic novel and I have to say I was pleasantly surprised by how much I enjoyed it. It was a little meatier than I thought it would be. I picked this one as I am doing a summer reading program and that was one of the challenges. This one caught my eye because of the cats and I am a cat lover. I liked how the author gave us a look about what happens to a house cat when it starts living outside as well as how outside cats think. I felt bad for Sasha and just wanted to take her in. I want to read the next book in this series to see what happens with Sasha and Tigerstar next.
Posted by Angela - Bookaunt at Tuesday, June 26, 2018