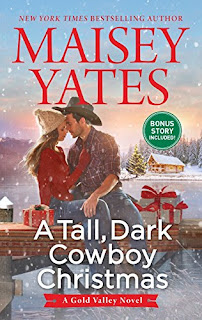 Book description
It’s Christmas in Gold Valley, and this wounded widower is about to get another shot at love…

Grant Dodge didn’t expect to find a woman sleeping in an abandoned cabin on his family ranch. Or to find her so intriguing. Unlike every other woman in town, McKenna Tate doesn’t know Grant’s a widower. There’s no pity in the looks she gives him. McKenna wants him, and Grant has forgotten what it’s like to feel like a man. A no-strings fling for Christmas might be the kind of holiday cheer Grant needs…

With only a suitcase to her name, McKenna came to Gold Valley to confront her birth father. She didn’t plan to work at the Dodge ranch or fall for the gorgeous cowboy who keeps his heart roped off. But there’s no denying the way their broken pieces fit together. Hope brought her to Gold Valley—but will it be the gift that could finally heal Grant, and McKenna’s own wounded heart?

Also includes a bonus Gold Valley novella, Snowed in with the Cowboy!

Meet the author - Maisey Yates
New York Times and USA Today Bestselling author Maisey Yates lives in rural Oregon with her three children and her husband, whose chiseled jaw and arresting features continue to make her swoon. She feels the epic trek she takes several times a day from her office to her coffee maker is a true example of her pioneer spirit.

Excerpt
McKenna Tate was used to sleeping lightly. And to­night was no exception. She had been keeping one ear tuned into the sounds around her, just in case, even while she dozed.

Not that deep sleeping in this place was likely. It was cold, and the floor of the little cabin was hard. Two days spent in it didn’t make it feel any more like home.

Except it wasn’t fine right now, because she heard something. And that was why she’d stirred.

Suddenly, reality slammed into her. The door to the cabin was opening.

She scrambled into a sitting position, attempting to push herself onto her feet, but then the door flung open completely, and she found herself stumbling back, hit­ting the wall and curling up there like a startled animal ready to strike.

It was a man. Which, out here in this big bad world, was the scariest thing she could think of. She would rather tangle with a bear any day. This was definitely a man.

Silhouetted in the doorway, tall and broad and ter­rifying. He had a cowboy hat pulled down low over his face, and she couldn’t see any of his features. She could just see that he was big.

“Calm down,” he said, as if a command issued from a stranger would make her feel calm.

“What?” So, now she knew he was insane, which was great. Telling a woman whose sleep he’d just in­terrupted to be calm.

“Like you would announce you were going to hurt me if that was your plan,” she said, curling up tighter.

“I have no idea what I would do if I was going to hurt you. Because I’m not going to. I do, however, want to know what you’re doing here.”

“I can see that. Or rather, I could. Though you aren’t sleeping now.”

“Very observant. I’d give you a trophy, but I’m fresh out.”

He shifted, crossing his arms. “You’re awfully mouthy for somebody sleeping on someone else’s prop­erty.”

“And you’re awfully chatty for a guy who just found someone sleeping on his property. Don’t you have follow-up questions?”

“Several. But I don’t want you crouched there in the corner like you think I’m about to stab you.”

She snorted out a laugh. “Oh, I’m not really that wor­ried you’re gonna randomly stab me. It’s other things I worry about with men.”

“You don’t have to worry about that, either,” he said.

His voice didn’t soften it all. He didn’t look like he felt bad for her, or like he pitied her in any way. That would not be the angle to take with him. Crying or anything like that. She could see that right away. She could paint a glorious picture of her tragic plight, and he would probably just stand there like a man carved from rock. Unmoved. Whoever he was, he was not a soft touch.

She was pretty good at identifying a soft touch. They were the kind of people who came in handy in desperate situations. People who wanted to wrap you in a blan­ket, give you a piece of pie and say some encouraging words so that they could go on with their day feeling like they were decent human beings.