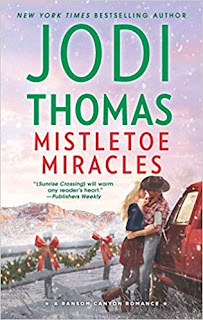 Book description
A small-town Texas Christmas story, where hearts are lost, love is found, and family always brings you back home.

Griffin Holloway is desperate: the Maverick Ranch has been in his family for generations, but lately, it’s a money pit. He’d sooner marry one of his horses than sell the ranch. Marriage, though, could be a solution. If he can woo a wealthy bride, he might save the ranch—just in time for Christmas.

Jaxon O’Grady likes his solitude just fine, thank you very much. But when a car accident brings the unexpected to his door, he realizes just how much one person can need another.

Crossroads is the perfect place for Jamie Johnson: avoiding nosy questions about why she’s single, she’s happy to keep to her lakeside home. So she’s baffled when she gets the strangest Christmas present of all, in the form of a Mr. Johnson, asleep on her sofa. Who is he, and why does everyone think he’s her husband?

Meet the author - Jodi Thomas
New York Times and USA Today’s bestselling author Jodi Thomas has published over 30 books in both the historical romance and contemporary genres, the majority of which are set in her home state of Texas. Publishers Weekly calls her novels “Distinctive…Memorable,” and that in her stories “[tension] rides high, mixed with humor and kisses more passionate than most full-on love scenes.” In 2006, Romance Writers of America (RITA) inducted Thomas into the RWA Hall of Fame for winning her third RITA for THE TEXAN’S REWARD. She also received the National Readers’ Choice Award in 2009 for TWISTED CREEK (2008) and TALL, DARK, AND TEXAN (2008). While continuing to work as a novelist, Thomas also functions as Writer in Residence at the West Texas A&M University campus, where she inspires students and alumni in their own writing pursuits.
Connect with Jodi
Website | Facebook | Twitter | Instagram


Excerpt
He hated cute decorations. Hell, he hated all decora­tions. He hated holidays, period. Halloween to Christ­mas was not a happy time for him. But if he wanted Miss Franklin’s help, he’d better leave her creepy me­nagerie alone.

She offered him the seat at the end of the table.

“Daisy!” she yelled without noticing her sister standing three feet away at the door Griffin guessed led down a hallway. “The oldest Holloway boy has come to ask for our advice.”

Daisy made a squeaky noise, then answered, “I’ll get the muffins and coffee. Don’t start talking until I’m in the room. If a Holloway thinks he’s got a prob­lem, it must be huge ’cause them boys were all three spoiled by their mother to think they were perfect and knew everything.”

“I heard that.” Griffin plopped his Stetson down on the table just to irritate the ladies. “Mom has been buried for over a dozen years. Perfection seems to have slipped a bit among her offspring.”

Rose picked up his hat and set it brim up on the windowsill. “Except for being nearsighted about her sons, your mama was a good woman.”

Griffin nodded and took the seat offered. He had no idea if he was being ordered to the head of the table or the tail. “That she was and I’m hoping the next Mrs. Holloway will be the same.”

Besides, it was too late to bolt now. He’d set his course. While the ladies downed their coffee and two muffins each, he laid out his problem as quickly as possible.

One of the Holloway men needed a wife, one with money or land. One willing to marry by Christmas. Leaning close, he lowered his voice and added, “I wouldn’t want this out, but come January, we’re li­able to lose the place if we don’t come up with cash.” He winked at them. “You’ll keep that quiet, ladies?”

They both nodded, swearing to a secret everyone in the county already knew. If the Holloways weren’t low on cash, now that might be something new. Word was, several ranchers were already planning to make the bank an offer as soon as the land was foreclosed on. Of course, no one would want the whole ranch, but the bank could split it up into a dozen smaller parcels.

Griffin would rather have someone carve up his heart than sell off the ranch in pieces. Five genera­tions were buried there. His father’s trees. His mother’s honeysuckle. Over a hundred years of Holloways had worked the land, and Griffin wanted another hundred years more to do the same.

To his surprise, the sisters didn’t ask one question about the why to his plan. They were far more inter­ested in the who.

When he admitted he didn’t have a bride in mind, the Franklin sisters just stared at him as if they’d ac­cidentally let in a serial killer.

Griffin ate his muffin in silence and waited. The plan had sounded better in his head. Maybe he should have been more detailed, but the whole thing seemed simple. Find a rich woman, marry her, add her money or credit potential into the bank account. He’d heard a dozen women over the past year say they’d love to marry into his family. Only they didn’t seem to be around now.

The only other choice was to sell part of the ranch, and every Holloway buried on the land would come back to haunt him if Griffin did that. He was out of options.

“What about love?” Rose whispered. She said the words slowly, as if fearing he might ask for an expla­nation.

“Of course we’d love her.” Griffin wanted to scream that love had nothing to do with this. The Franklin sis­ters didn’t seem to realize the sacrifice he, or one of his brothers, was willing to make. He quickly added, “Franklin men tend to fall in love fast. We’re kind of the at-first-sight types. So the falling-in-love part won’t take long, but meeting eligible women is hard when you’re busy from dawn till dark ranching.”