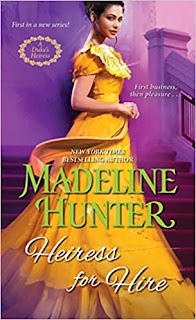 My thoughts
I enjoyed this first book in this new series.  Minerva was intriguing to me from the first time she appeared in the book.  Chase was a stand up guy that would be nice to know.  Nicholas was a person you should keep your eye on as you never know what he is going to do.  I liked how Chase and Minerva were both trying to figure out why the duke left his money to who he did but yet they both kept secrets.  I felt this was a good start to a new series.
Posted by Angela - Bookaunt at Monday, April 27, 2020