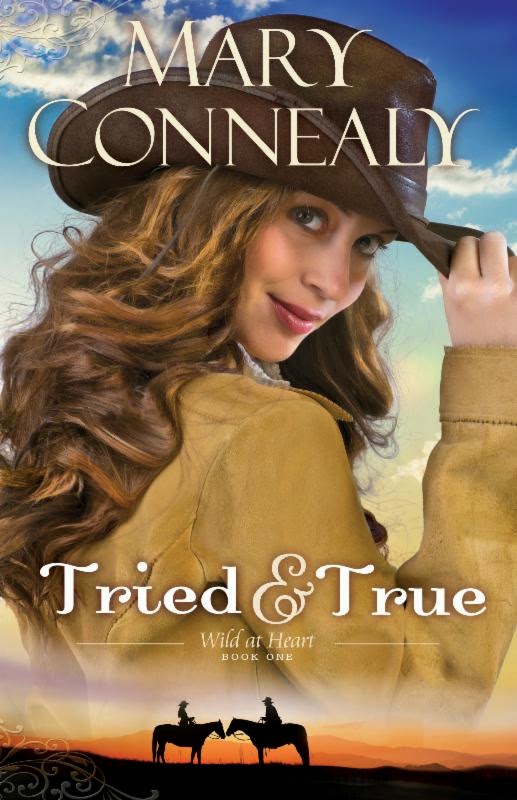 I received this book in exchange for a fair and honest review
Tried and True by Mary Connealy
Wilde at Heart Series #1
ISBN: 9780764211782

Synopsis: Saddle up for a wildly fun ride with the Wilde sisters!
Kylie Wilde is the youngest sister–and the most civilized. Her older sisters might be happy dressing in trousers and posing as men, but Kylie has grown her hair long and wears skirts every chance she gets. It’s a risk–they are homesteading using the special exemptions they earned serving in the Civil War as “boys”–but Kylie plans to make the most of the years before she can sell her property and return to the luxuries of life back East.
Local land agent Aaron Masterson is fascinated with Kylie from the moment her long hair falls from her cap. But now that he knows her secret, can he in good conscience defraud the U.S. government? And when someone tries to force Kylie off her land, does he have any hope of convincing her that marrying him and settling on the frontier is the better option for her future?
My review: Mary has a great start to another series that I am going to enjoy. I think it is cool that Kylie and her sisters served in the Civil War posing as men. How frustrating for them though that their exemption was going to be taken away from them because they are women. Mary did a good job of telling the story of the many women who served in the war under disguise through Kylie's story. I felt really bad for Aaron going home to find his family all gone, I can't imagine how that must have felt. It was fun watching the romance blossom between Aaron and Kylie. The characters were very well developed and strong which for me helps the story. I look forward to reading the rest of the books in this series.
Purchase a copy:  http://ow.ly/AS8Js
About the author: Mary Connealy writes fun and lively "romantic comedy with cowboys" for the inspirational market. She is the author of the successful Kincaid Brides, Lassoed in Texas, Montana Marriages, and Sophie's Daughters series, and she has been a finalist for a Rita and Christy Award and a two time winner of the Carol Award. She lives on a ranch in eastern Nebraska with her husband, Ivan, and has four grown daughters.

Don't miss the first book in Mary Connealy's Wild at Heart series. In Tried & True, Mary is back with her signature humor and heartfelt story-telling.

Mary's celebrating by connecting with readers during a live webcast event and giving away a Kindle HDX.

One winner will receive:
Enter today by clicking one of the icons below. But hurry, the giveaway ends on September 23rd. Winner will be announced at the Tried & True LIVE webcast event on September 23rd. Connect with Mary for an evening of swoon-worthy book chat, fun trivia, laughter, a sneak peek at the next book in the Wild at Heart series, and more! Mary will also be taking questions from the audience and giving away books, fun prizes, and gift certificates throughout the evening.

So grab your copy of Tried & True and join Mary and friends on the evening of September 23rd for a chance to connect and make some new friends. (If you haven't read the book, don't let that stop you from coming!)

Don't miss a moment of the fun; RSVP today by signing up for a reminder. Tell your friends via FACEBOOK or TWITTER and increase your chances of winning. Hope to see you on the 23rd!