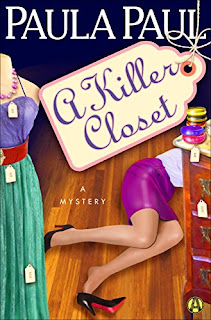 Irene Seligman loves the warmth and beauty of her Southwest hometown, but only one thing could make her quit her prestigious job as an assistant district attorney in Manhattan to return there: the guilt applied by her demanding mother, Adelle. After Adelle’s most recent husband dies, leaving her with nothing, Irene decides to take a break from prosecuting criminals to move back to Santa Fe and open an upscale consignment store. With Irene’s determination and her mother’s eye for haute couture, they’re sure to make a killing.

But on the day of the grand opening, Irene discovers the body of one of Adelle’s friends in her storeroom. And although the intrigue causes business to boom, when someone else from Adelle’s social circle is murdered, Irene begins to suspect her mother might be in danger too. Ever the protective daughter, Irene investigates her mother’s friends, suspicious that they’re hiding more than designer clothes in their closets. But as she gets closer to uncovering some real skeletons, Irene might not live to regret coming home again.

About the author:
Award-winning novelist Paula Paul was born on her grandparents’ cotton farm near Shallowater, Texas, and graduated from a country high school near Maple, Texas. She earned a BA in journalism and has worked as a reporter for newspapers in both Texas and New Mexico. She’s been the recipient of state and national awards for her work as a journalist as well as a novelist. She’s the author of many mysteries, including the Alexandra Gladstone series and the Mystery by Design series, which she wrote as Paula Carter. She lives in Albuquerque, New Mexico.

Guest Post:
“Where do you get your ideas for your novels?”

That’s one of the most frequent questions I get when someone learns that I’ve published several works of fiction. I once read a joke in a writers magazine that the correct answer is: “There is a store house in Illinois where writers go and pull ideas out of a drawer.”

It’s one way of saying that most writers don’t know exactly where the ideas come from, except that they come from everywhere. I’ve gotten ideas from books, conversations, landscapes, experiences, dreams, observations—just about everywhere.

For example, the idea for the Irene’s Closet series I’m writing now came after my agent, Irene Kraas, introduced me to consignment store shopping and especially after she started talking about opening an upscale consignment store of her own. I suggested she call it Irene’s Closet. Ultimately, after doing some market research, she decided against the idea. That’s when I told her that the idea didn’t have to die, that I could write a mystery series about a consignment store owner. She encouraged me to write it, so I did. The result is the first book in the series, Killer Closet. I’ve started the second in the series which will be out sometime in 2017.

While I don’t have to get into a lot of detail about running a store in order to write the books, I did have to learn something about designer fashion brands and haute couture, which is what my character, Irene Seligman, features in her store. My knowledge of clothes that cost $5000 and up was limited to a few fashion shows I’d accidently tuned into on television.

The idea to set the stories in Santa Fe, New Mexico, came easily since I live an hour away from Santa Fe in Albuquerque, New Mexico. While Albuquerque is the largest city in the state and is the state’s financial and commercial center as well as home to the University of New Mexico and one of the country’s premier medical schools and large scientific research centers, it is Santa Fe that is the most unique.

The nickname for the town is “The city different.” Believe me, it’s different. It’s heavily influenced by the state’s three cultures: Native American, Hispanic, and Anglo. Descendants of the Spanish Conquistadores live there along with descendants of famous Native American war chiefs, and of notable Americans such as Kit Carson. Ancient Native American and Hispanic ceremonies are still observed there. It’s one of the nation’s top art centers. It’s the state capitol. It’s surrounded by Indian Pueblos and reservations. It’s only a few miles from what was once the seat of the Spanish Inquisition in the New World. Could there be a better place to set a story? I don’t think so.

As for the characters, well, they too come from everywhere. Usually any one character is a mixture of people I know. Another frequent question is whether or not any of the characters represent me. I try not to allow that to happen, although it’s inevitable that a least a little of me will show through now and then. That was especially true when I wrote Crazy Quilt, a book about a woman who’d had breast cancer. I wrote it just after I finished treatment for cancer.

The truth is, ideas are everywhere. You just have to allow them to enter your mind. Even when they’re scary.