Body on the Bayou by Ellen Byron - Guest Post and Giveaway 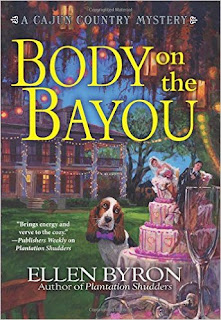 Synopsis:
The Crozats feared that past murders at Crozat Plantation B&B might spell the death of their beloved estate, but they’ve managed to survive the scandal. Now there’s a très bigger story in Pelican, Louisiana: the upcoming nuptials between Maggie Crozat’s nemesis, Police Chief Rufus Durand, and her co-worker, Vanessa Fleer.

When everyone else refuses the job of being Vanessa’s Maid of Honor, Maggie reluctantly takes up the title and finds herself tasked with a long list of duties–the most important of which is entertaining Vanessa’s cousin, Ginger Fleer-Starke. But just days before the wedding, Ginger’s lifeless body is found on the bayou and the Pelican PD, as well as the Crozats, have another murder mystery on their hands.

There’s a gumbo-potful of suspects, including an ex-Marine with PTSD, an annoying local newspaper reporter, and Vanessa’s own sparkplug of a mother. But when it looks like the investigation is zeroing in on Vanessa as the prime suspect, Maggie reluctantly adds keeping the bride-to-be out of jail to her list of Maid of Honor responsibilities in Body on the Bayou.
About The Author
Ellen’s debut novel, PLANTATION SHUDDERS

, will be available in September 2016. Ellen’s TV credits include Wings and Just Shoot Me; she’s written over 200 magazine articles; her published plays include the award-winning Graceland and Asleep on the Wind. Ellen Byron is a native New Yorker who lives in Los Angeles and attributes her fascination with Louisiana to her college years at New Orleans’ Tulane University.

I was lucky enough to be invited to the Louisiana Book Festival in Baton Rouge this year to talk about my new book, BODY ON THE BAYOU, the latest in my Cajun Country Mystery series.

I flew in from Los Angeles on Friday for the Authors Party at the Louisiana State Library, and my New Orleans bestie, Jan, and I drove straight there from the airport. We wined and dined on delicious Creole and Cajun cuisine, and then headed back to the hotel. I had a sudden sensation that we were being followed, and whipped around to see a pixieish man who turned out to be the author of a book on the history of seersucker, which he informed us was invented in New Orleans. (And now you know more than you ever thought you'd know about seersucker.)

We shared hellos. He asked about my background. I explained that I was from New York, live in Los Angeles, but I went to school at Tulane University. "So you're home," he said.

His comment threw me. How did he know that? I've spent less time in Louisiana than either New York or Los Angeles. Yet it feels like home. Is it the warmth of the people? The unique, welcoming culture? The incredible food? All of that?

Despite my long tenure in Los Angeles, a city I moved to for my job as a sitcom writer, I've always considered New York the home where my heart lies. But as I write my mystery series, delving into the culture and history of the region I fell in love with during college, Louisiana exerts more and more of a pull on my heart.

So I think the man who wrote about seersucker was right. When I'm Louisiana, I am home. At least in my heart and in my soul. And perhaps someday a dream of mine will come true, and I'll make the remarkable Cajun Country my actual home. 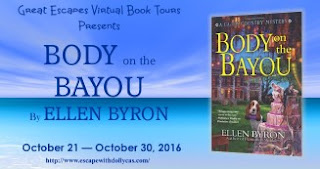