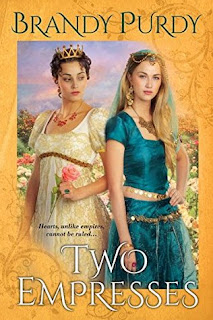 Synopsis:
1779, France. On the island paradise of Martinique, two beautiful, well-bred cousins have reached marriageable age. Sixteen-year-old Rose must sail to France to marry Alexander, the dashing Vicomte de Beauharnais. Golden-haired Aimee will finish her education at a French convent in hopes of making a worthy match.

Once in Paris, Rose’s illusions are shattered by her new husband, who casts her off when his mistress bears him a son. Yet revolution is tearing through the land, changing fortunes—and fates—in an instant, leaving Rose free to reinvent herself. Soon she is pursued by a young general, Napoleon Bonaparte, who prefers to call her by another name: Josephine.

Presumed dead after her ship is attacked by pirates, Aimee survives and is taken to the Sultan of Turkey’s harem. Among hundreds at his beck and call, Aimee’s loveliness and intelligence make her a favorite not only of the Sultan, but of his gentle, reserved nephew. Like Josephine, the newly crowned Empress of France, Aimee will ascend to a position of unimagined power. But for both cousins, passion and ambition carry their own burden.

From the war-torn streets of Paris to the bejeweled golden bars of a Turkish palace, Brandy Purdy weaves some of history’s most compelling figures into a vivid, captivating account of two remarkable women and their extraordinary destinies

My thoughts;
This was a very interesting book. I liked learning about two new things in history. Yes I knew who Josephine was but did not know her name was actually Rose, but I have not actually read anything about her before. I also did not know who Aimee was. The author did a good job in her research. You can tell by way she writes. The descriptions of land, places and people made me feel as if I was walking the streets of Paris or the halls of the Turkish palace. It was fun how the book told both of the cousin's stories. This story was actually told at a steady pace for a historical book which was nice for reading it. I look forward to the next book by Brandy.

About the author:
Brandy Purdy is the author of several historical novels. When she's not writing, she's either reading, watching classic movies, or spending time with her cat, Tabby. She first became interested in history at the age of nine or ten when she read a book of ghost stories that contained a chapter about the ghost of Anne Boleyn haunting the Tower of London. Visit her website at http://www.brandypurdy.com for more information about her books. You can also follow her via her blog at http://brandypurdy.blogspot.com where she posts updates about her work and reviews of what she has been reading.