Two Suitors for Anna by Molly Jebber - Review and Giveaway 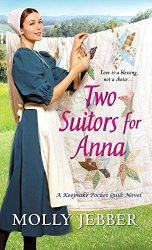 Synopsis:
In 1903 Ohio, a young Amish woman must choose between the life she has long planned for and a new, very different future…

Since Anna Plank moved to Berlin, Ohio, with her widowed mamm and two schweschders, she’s found a real sense of belonging. As soon as her beloved Noah Schwartz proposes, they’ll begin a new chapter here together. But Noah has a surprise for Anna: once they’re married, he wants them to travel and live in other communities. Anna, who loves her home and her job at the quilt shop, is distraught when he takes her hesitation as rejection—and leaves.

Daniel Bontrager’s arrival adds to Anna’s confusion. Since taking over his late brother’s farm, the handsome roofer has offered friendship and gentle attentions. Yet the pull of first love is strong and deep, especially when Noah returns. Through each revelation, Anna must search her faith for guidance, knowing she is choosing not just a husband, but a life to nurture and to share…

My thoughts:
I thought this was a nice book. The characters were very nice and I enjoyed reading about them. I felt like they were real people. The setting of the book was well described as well. I also liked the historical aspect of the book. The romance part of the book was good but not too overwhelming. You had to feel bad for Anna during the story as she had her heart set on marrying Noah but he wanted her to travel. Then she meets Daniel and that changes things. She felt like she was being pulled in two different directions. I enjoyed following her journey. I look forward to more books in this series.

About the author:
Molly Jebber’s books have been featured in Publisher’s Weekly, USA Today’s HEA, and Romantic Times has given them a near excellent rating. She’s on RWA’s Honor Roll. She’s a speaker for Women’s Christian Connection, and she offers presentations on writing, publishing, Amish lifestyle and traditions. She has received widespread media coverage, including live interviews, across the United States for her books and speaking engagements.

She’s just signed a new contract for four more Amish books! She loves interacting with her readers. She loves God, her husband, family and friends. She has a hard time saying no to cupcakes, swimming, nine holes of golf, and walks on the beach. Coconut, oatmeal, and onions, on the other hand, are not hard to say no to!

Giveaway:
To celebrate her tour, Molly is giving away a Kindle Fire HD. Click below to enter. Be sure to comment on this post before you enter to claim 9 extra entries! https://promosimple.com/ps/af95