A Sky without Stars by Linda S. Clare - Giveaway included 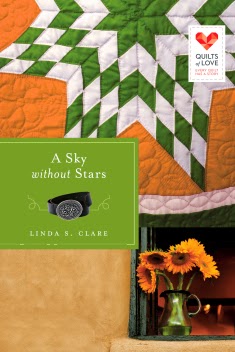 Synopsis: In 1951, Frankie Chasing Bear is a Lakota caught between cultures. She wants to raise her son Harold to revere his Lakota heritage, but she knows he will need to become as a white man to succeed. After his father's killed in a barroom brawl, Harold and Frankie move to Arizona, where she begins a Lakota Star pattern quilt for Harold with tribal wisdom sung, sewn and prayed into it.
She distrusts Christians, as her own parents were forced to convert at an Indian School, until she meets BIA agent Nick Vandergriff, a half-Lakota who's also caught between cultures. Nick must convince Frankie that white men and Christians aren't all bad as he tries to win her heart in order to put the stars back into her sky.

My review: I was drawn to this book because the characters are Native American and I enjoy reading books about them. This is the first book I have read by this author and I thought she did a good job in the telling of this story. It is so nice that this entire series has a quilt somewhere in the story. You can read this book as a standalone as each book is it's own story. Another part of this story that I really liked was that Frankie wanted to teach her son about his Lakota heritage and to respect it. I think that is very important. One thing I did not like was the way the Native American's were treated at this time, I know it was the way it was but I don't like it and it had to be told as it was a part of the story. The author did a nice job in the way she wrote the book so it was very easy to read as well as enjoyable. I recommend this book to fans of Christian fiction and fans of Native American Stories.

Be sure to check out - Litefuse (click here) to see all the stops on the tour.

About the Author: Linda S. Clare is an award-winning coauthor of three books, including Lost Boys and the Moms Who Love Them(with Melody Carlson and Heather Kopp), Revealed: Spiritual Reality in a Makeover World, and Making Peace with a Dangerous God (with Kristen Johnson Ingram). She is also the author of The Fence My Father Built. She has taught college-level creative writing classes for seven years, and edits and mentors writers. She also is a frequent writing conference presenter and church retreat leader. She and her husband of thirty-one years have four grown children, including a set of twins. They live in Eugene, Oregon, with their five wayward cats: Oliver, Xena the Warrior Kitty, Paladine, Melchior, and Mamma Mia!
Don't miss this month's Quilts of Love book, A Star Without Stars, by Linda S. Clare. Linda is celebrating the release with a Kindle HDX giveaway and joining her fellow Quilts of Love authors, Barbara Cameron and Joyce Magnin, for a Facebook "Spring Fling" party on April 1st.

One winner will receive:
Enter today by clicking one of the icons below. But hurry, the giveaway ends on April 1st. Winner will be announced at the "Spring Fling" Facebook Party on April 1st. RSVP today and connect with the authors from the Quilts of Love series, Barbara Cameron, Linda S. Clare, and Joyce Magnin, for an evening of book chat, quilt trivia, prizes, and an exclusive look at the next Quilts of Love book!

So grab your copies of Scraps of Evidence, A Sky Without Stars, and Maybelle in Stitches and join Barbara, Linda, and Joyce on the evening of April 1st for a chance to connect and make some new friends. (If you haven't read the books, don't let that stop you from coming!)

Don't miss a moment of the fun; RSVP today by clicking JOIN at the event page. Spread the word—tell your friends about the giveaway and party via FACEBOOK or TWITTER. Hope to see you on April 1st!