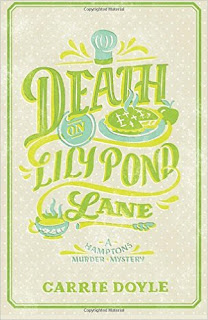 Synopsis:
Springtime in the Hamptons comes late, but it’s worth it! Brisk walks on the bright chilly beach, cinnamon buns at tea time, blooming forsythia and….murder?

Innkeeper Antonia Bingham has hit her stride as the proprietor of East Hampton’s Windmill Inn. After solving a series of murders, Antonia has taken on more work as an estate manager, giving her entree into some of the area’s most glamorous homes. Once inside, Antonia checks the heat, looks for leaks or damage, and finds the occasional dead body. As the police can’t be trusted, it’s up to Antonia—a modern day Miss Marple, with an overly enthusiastic adoration of carbs and a kamikaze love-life—to put her skills of deduction to use. Nestle in with a steaming mug of your favorite tea and get ready to peek behind the gates of the mansions of the Hamptons, as Antonia Bingham solves another shocking and devastating murder.

My thoughts:
I have been enjoying this series. Even though it is a mystery series it has a sort light and airy feeling about it. It was nice to go back and visit Antonia and the Inn again even if a murder was involved. I think it would be fun to go into the old homes as she does but again I would not want to find a dead body.  She does seem to get herself into little binds which is all part of the fun of the book. Another thing I liked about this story was we got to see Antonia and Joseph's relationship go a little further. I liked Joseph helped Antonia by doing research for her. The author kept me guessing until the very end which is something I think makes a good mystery. I am looking forward to the next book in this series.

About Carrie Doyle
Carrie Doyle was the founding Editor-in- Chief of the Russian edition of Marie Claire Magazine. She is currently a Contributing Editor of Hamptons Magazine and has written extensively for Harper’s Bazaar, Town & Country and has also written for Women’s Health and Avenue on the Beach. With Jill Kargman, Carrie co-wrote the film Intern (which premiered at the Sundance Film Festival in 1999), as well as several screenplays sold to Showtime, Paramount Pictures, Nickelodeon Films and the Oxygen Network. Carrie and Jill co-wrote five books together, including three teen books for HarperCollins and two bestselling women’s fiction books, The Right Address and Wolves in Chic Clothing (Broadway Books). Carrie also penned the popular novel The Infidelity Pact (Broadway Books). Carrie lives in New York City with her husband and two children and is currently at work on an animated series for broadcast as well as her new series, the Hamptons Murder Mysteries.

The author has agreed to giveaway a copy of both books one (Death on Windmill Way) and two (Death on Lily Pond Lane) in this series to one luck winner. Good Luck! 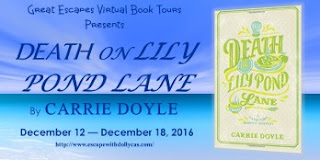