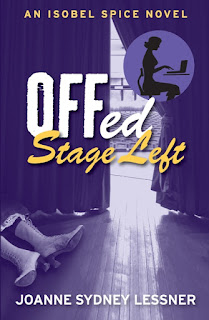 Synopsis:
There’s one role you don’t want a callback for: Prime Suspect. Aspiring actress Isobel Spice lands her first regional theater job, playing a supporting role and understudying the lead in Sousacal: The Life and Times of John Philip Sousa. A series of minor backstage accidents culminates in the suspicious death of the leading lady on opening night. When Isobel takes over the role, her mastery of the material makes her more suspect than savior, and she realizes the only way to clear her name is to discover the identity of the murderer—before he or she strikes again.

About The Author
Writer, singer, and actor Joanne Sydney Lessner draws on her own experiences pursuing a performing career in New York City for her acclaimed Isobel Spice Mysteries: THE TEMPORARY DETECTIVE

, AND JUSTICE FOR SOME

. With humor and a bit of romance, Isobel juggles auditions and temp jobs, solving murders along the way, while Joanne’s inside knowledge provides a window into the realities of breaking into show business (as well as a forum to share every humiliating audition experience she and her friends ever had.) Joanne’s debut novel, PANDORA’S BOTTLE

, was inspired by the true story of the world’s most expensive bottle of wine and was named one of the top five books of 2010 by Paperback Dolls. With her husband, composer/conductor Joshua Rosenblum, she has co-authored several musicals, including the cult hit FERMAT’S LAST TANGO and EINSTEIN’S DREAMS, based on the celebrated novel by Alan Lightman. Her play, CRITICAL MASS, received its Off Broadway premiere in October 2010. Joanne is also a regular contributor to OPERA NEWS and a graduate of Yale University.

Last year, I moved to New York ready to claw my way into auditions, but I never expected having to fight to get a temp job. I mean that’s what every actor does when they move to New York, right? That or wait tables (and, oh boy, you do not want me doing that—I once dropped five boiled lobsters on a nun.) But how come everyone else seems to just waltz out of college right into a temp job? If James Cooke at Temp Zone hadn’t taken a chance on me, I don’t know what I’d have done. Then again, before lunch on the first day of my first job, I found a dead secretary in the bathroom. I hate when that happens. But it wound up being pretty exciting, especially when I unmasked the murderer before the police could figure it out. Given how condescending they were, I rather enjoyed that. After that, I temped at a PR firm, and it was all going swimmingly until a client dropped dead over a cup of coffee I had just served him. (Yeah, hate when that happens!) Figured that one out, too, though. Then my friend Delphi and I got hired to do interactive murder mystery dinner theater, and someone picked off guest of honor right before dessert. Everyone thought Delphi did it, since she was left holding the not-very-smoking prop gun, but fortunately, I was working for a lawyer, and not only were we able to prove Delphi didn’t do it, I managed yet again to figure out who did.

So now I’m taking a break! I finally got my first regional theater job doing a show in Albany. Okay, I’ll be honest, the show kind of sucks. It’s called Sousacal: The Life and Times of John Philip Sousa (not to be confused with Seussical, which is based on the work of Dr. Seuss and so much better). All the songs in Sousacal are…wait for it…Sousa marches with words. And yes, it’s as terrible as you’re imagining. Worse, I think. Wanna hear my favorite one? Okay, sing along now, to the tune of “The Stars and Stripes Forever” (better know as “Be kind to your web-footed friends,” which, by the way, is an infinitely superior lyric, as you will see):

We loved you, but now you are gone.
How we’ll miss you, dear John Philip Sousa!
In your marches your legend lives on,
That conclusion is now foregone.

You may think that this is the end,
Of this red, white, and blue lollapalooza.
To this country, you’ve been a great friend—
Raise a baton and carry on for JP Sousa!

What did I tell you? Although I’m mildly impressed that the lyricist rhymed “Sousa” with “lollapalooza.” But that’s the extent of it. Thank God I don’t have a very big part, so my personal embarrassment quotient will be low. I’m understudying the leading lady, though, and let me tell you, it wouldn’t surprise me if someone offed her before opening night. She is a piece of work! She thinks I’m trying to get rid of her so I can play her part, when all I’m doing is the job I was hired for! I’m learning her role, which means I have to watch her very closely during rehearsals. Some people are so paranoid. And while it would be fun to be the star for a night or two, it would mean singing more of those awful lyrics. Still, in a three-week run, anything could happen. And knowing the kinds of situations I usually find myself in, something probably will.