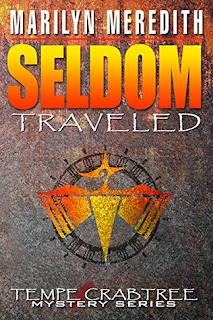 Synopsis:
The tranquility of the mountain community of Bear Creek is disrupted by a runaway fugitive, a vicious murderer, and a raging forest fire. Deputy Tempe Crabtree is threatened by all three.

About the author:
Marilyn has had so many books published, she’s lost track of the count, but it’s getting near 40. She lives in a community similar to the fictional mountain town of Bear Creek, the big difference being that Bear Creek is a thousand feet higher in the mountains.

Fans have had the following to say about the series:
“The series combines family life, spirituality, Native American issues and California beauty.”
“Multicultural settings and alternate beliefs are dealt with dignity and respect, but not sentimentality.”
“I love it when Tempe’s Native American spirituality helps her solve mysteries.”