Elementary, She Read by Vicki Delany - Guest Post and Giveaway 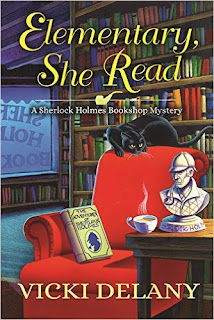 Synopsis:
Gemma Doyle, a transplanted Englishwoman, has returned to the quaint town of West London on Cape Cod to manage her Great Uncle Arthur’s Sherlock Holmes Bookshop and Emporium. The shop–located at 222 Baker Street–specializes in the Holmes canon and pastiche, and is also the home of Moriarty the cat. When Gemma finds a rare and potentially valuable magazine containing the first Sherlock Homes story hidden in the bookshop, she and her friend Jayne (who runs the adjoining Mrs. Hudson’s Tea Room) set off to find the owner, only to stumble upon a dead body.

The highly perceptive Gemma is the police’s first suspect, so she puts her consummate powers of deduction to work to clear her name, investigating a handsome rare books expert, the dead woman’s suspiciously unmoved son, and a whole family of greedy characters desperate to cash in on their inheritance. But when Gemma and Jayne accidentally place themselves at a second murder scene, it’s a race to uncover the truth before the detectives lock them up for good.

About the author:
Vicki Delany

is one of Canada’s most prolific and varied crime writers. She is the author of twenty-three published crime novels, including standalone Gothic thrillers, the Constable Molly Smith series, and the Year Round Christmas Mysteries. Under the pen name of Eva Gates

she is the national bestselling author of the Lighthouse Library cozy series.

, will be released in March 2017 from Crooked Lane Books.

Vicki lives and writes in Prince Edward County, Ontario. She is the past president of the Crime Writers of Canada.

Books can be set in real places, in fictional places, or in a combination of the two.

Other than fantasy or science fiction novels, there aren’t many set in truly made-up places. Meaning, somewhere that came completely out of the author’s imagination.

Otherwise, we all live here on Planet Earth and if we set our books someplace we don’t know well, you can be sure someone knows it, and will point out your mistakes.

The lighthouse library series I write under the name of Eva Gates, is set in a very real place. The Bodie Island Lighthouse located just outside of Nags Head, North Carolina. The lighthouse itself is real, and the area around it and the entire Outer Banks are real and I have tried to recreate that as faithfully as possible in the books. With the exception of the interior of the lighthouse itself, which does not contain (nor is it big enough to contain) a library.

Once the author has decided on a real place, the pressure is on to get it right. Real people live there or vacation there, and know it and love it. Make a mistake – and the author will hear about it.

Which is why I prefer to set my books in someplace that is fictional, but closely based on a real location. Case in point: West London, Massachusetts, the location of the Sherlock Holmes Bookshop and Emporium.

First of all, I needed a town with a Baker Street. Number 220 (the location of the book store) and 222 (for the adjacent Mrs. Hudson’s Tea Room) had to be in the downtown shopping district. I needed a town name reminiscent of England: thus West London.

If I am not setting books where I live, I like to put them someplace I’d enjoy visiting. On the ocean, with a thriving tourist economy, lots of charming houses and old buildings.

For this series Cape Cod seemed a natural fit.

I studied maps for the perfect location, and decided that the peninsula near Chatham would be a good fit. Located on both the Atlantic Ocean and Nantucket Sound.

And a brand-new, typical Cape Cod town was born. I even gave it a lighthouse.

West London sits on the eastern shore of Cape Cod, with the Atlantic Ocean to the east and Nantucket Sound to the southwest, not far from the better-known town of Chatham. Restaurants overlooking the water spread out onto spacious patios, lined with pots of brilliant flowers and protected by colorful umbrellas. Lineups waiting for tables stretched down the sidewalk. The boardwalk on the far side of the road was crowded with people licking ice cream while they strolled and watched boats bobbing in the calm waters of the harbor and fisherman trying their luck from the pier. More tourists took pictures of the West London lighthouse, painted white with three thick red bands, built in 1821.

Elementary, She Read by Vicki Delany
Giveaway:
a Rafflecopter giveaway 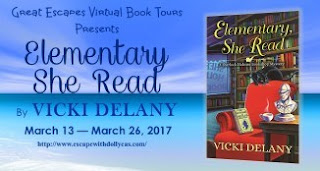