Purr M for Murder by T.C. LoTempio - Spotlight and Giveaway 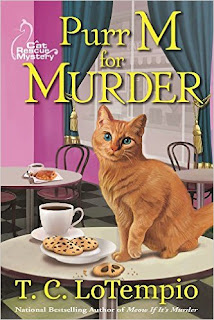 Synopsis:
Sydney McCall left behind an ex-fiancé and a New York advertising job to return home to Deer Park, North Carolina and help her sister, Kat, run the local animal shelter, Friendly Paws. Determined to save the shelter from financial trouble, Sydney and Kat organize a cat café fundraising event at a local coffee shop. Things are looking up until their landlord, Trowbridge Littleton, threatens to shut down the event. When Sydney drops by his art gallery to make peace, she finds Kat–along with Littleton’s dead body.

Local homicide detective Will Worthington–who just happens to be Sydney’s old high school crush–is highly suspicious of the sisters’ involvement. Desperate to clear their names from the suspect list, Sydney pounces on the investigation. With the help of one of the shelter cats, a savvy orange tabby named Toby, Sydney begins poking her nose into other local businesses whose owners may have benefited from Littleton’s death–until the killer notices she’s pawing a little too closely at the truth.

About the author:
While Toni Lotempio does not commit – or solve – murders in real life, she has no trouble doing it on paper. Her lifelong love of mysteries began early on when she was introduced to her first Nancy Drew mystery at age 10 – The Secret in the Old Attic. She (and ROCCO, albeit he’s uncredited) pen the Nick and Nora mystery series from Berkley Prime Crime – the first volume, MEOW IF ITS MURDER,

, was released in December. She, Rocco and Maxx make their home in Clifton, New Jersey, just twenty minutes from the Big Apple – New York. Catch up with them at www.tclotempio.net and www.catsbooksmorecats.blogspot.com

Where to find them:
ROCCO’s blog:
www.catsbooksmorecats.blogspot.com 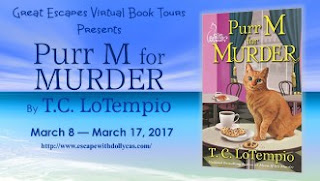