The Reason for Time by Mary Burns - Review 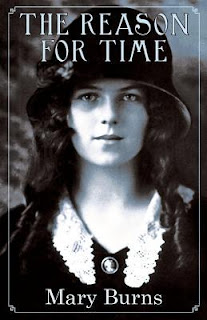 Book Synopsis:
Whole minutes passed when I didn't think of my man and the swimming lesson set up for the next day, if no one was murdered before then, or the cars stopped, or a bomb go off somewhere... On a hot, humid Monday afternoon in July 1919, Maeve Curragh watches as a blimp plunges from the sky and smashes into a downtown Chicago bank building. It is the first of ten extraordinary days in Chicago history that will forever change the course of her life. Racial tensions mount as soldiers return from the battlefields of Europe and the Great Migration brings new faces to the city, culminating in violent race riots. Each day the young Irish immigrant, a catalogue order clerk for the Chicago Magic Company, devours the news of a metropolis where cultural pressures are every bit as febrile as the weather. But her interest in the headlines wanes when she catches the eye of a charming streetcar conductor. Maeve's singular voice captures the spirit of a young woman living through one of Chicago's most turbulent periods. Seamlessly blending fact with fiction, Mary Burns weaves an evocative tale of how an ordinary life can become inextricably linked with history.

What did I think of this book:
This was a new to me author and I thought her book was a good one. The author's research showed which for me adds a little to the story as it makes it seem as if the story could really happen. I found myself pulling for Maeve and wanting her life to turn out for the better. It must have been scary and very hard for her to runaway to start a new life in a new country. I do not know if I could have done that, but she knew she must for her own sanity. The author had a way of writing this story that pulled you in from the very first page and did not let go. Her descriptions of the settings were well done so that you felt like you were right there with the characters. I also thought her characters were well developed. I will be watching for more books by her.

About the author:
A former journalist, documentary filmmaker, and professor of Creative Writing, Mary Burns has published four novels, including her first historical novel, The Reason for Time, released in Spring of 2016, http://alliumpress.com/our-books/the-... She is also the author of two books of short stories and a non-fiction book, The Private Eye: Observing Snow Geese. Her first book, Suburbs of the Arctic Circle, was selected by the Literary Press Group as a Writer's Choice, and The Private Eye was shortlisted for the Science in Society book award. Her radio plays were broadcast on CBC and BBC, and her "A Yukon Quintette, was featured in the anthology of CBC's Morningside dramas, "Take Five." She has written for the stage as well. More information on her life and work on her website, www.maryburns.ca
Posted by Angela - Bookaunt at Tuesday, March 07, 2017