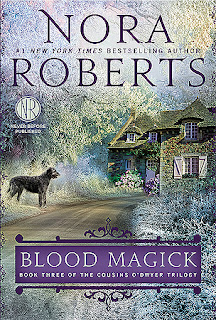 Synopsis:
From #1 New York Times bestselling author Nora Roberts comes a trilogy about the land we’re drawn to, the family we learn to cherish, and the people we long to love…

County Mayo is rich in the traditions of Ireland, legends that Branna O’Dwyer fully embraces in her life and in her work as the proprietor of The Dark Witch shop, which carries soaps, lotions, and candles for tourists, made with Branna’s special touch.

Branna’s strength and selflessness hold together a close circle of friends and family—along with their horses and hawks and her beloved hound. But there’s a single missing link in the chain of her life: love…

She had it once—for a moment—with Finbar Burke, but a shared future is forbidden by history and blood. Which is why Fin has spent his life traveling the world to fill the abyss left in him by Branna, focusing on work rather than passion.

Branna and Fin’s relationship offers them both comfort and torment. And though they succumb to the heat between them, there can be no promises for tomorrow. A storm of shadows threatens everything that their circle holds dear. It will be Fin’s power, loyalty, and heart that will make all the difference in an age-old battle between the bonds that hold their friends together and the evil that has haunted their families for centuries.

My thoughts:
This book was everything I expected it to be and more. The only problem I had with this book is I wanted to read it faster so the battle between the cousins and the evil that haunted them to happen so I could see who would win.  It was nice to see all the cousins working together and each of them becoming stronger as well as their partners. I liked how we got to see more of the cousins from a previous time. For me the who witch theme added to the story. The descriptions were so good you could feel the fog creeping in, feel the fire burn and see the beautiful landscapes as they were our riding and hawking. I felt like the romance was a good part of the story but it did not take over the story which I liked. The ending was satisfying for me and had me holding my breath for awhile. This is the third book in this trilogy and I suggest you read all the books in order.

About the author:
Nora Roberts is the #1 New York Times bestselling author of more than 200 novels, including The Liar, The Collector, Whiskey Beach, The Witness, and many more. She is also the author of the bestselling In Death series written under the pen name J. D. Robb. There are more than 500 million copies of her books in print.
Posted by Angela - Bookaunt at Friday, November 25, 2016