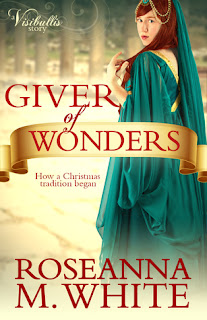 Synopsis:
A miracle once saved her life ~ will another give her a future?

Cyprus was little more than a child when a fall left her paralyzed...and when the boy known as the wonder-worker healed her. Ever since, she has wondered why the Lord spared her, what he has in store for her. But her pagan father thinks she was spared solely so she could be introduced to the wealthy wonder-worker, Nikolaos.

Nikolaos has never questioned that his call in life is to dedicate himself to the church and to God. Never, that is, until he and his cousin Petros meet the compelling Cyprus Visibullis. For years he struggles with the feelings she inspires...and with the sure knowledge that Petros loves her too.

Petros knows he will never be good enough for Cyprus's father to consider him as a match for his favorite daughter not as long as Nikolaos is there. But when tragedy strikes the Visibullis family, he will do anything to save his beloved. Unfortunately, his beloved is determined to do anything to save her sisters ~ even at the cost of herself.

As the festival of lights bathes their Greek city in beauty, Cyprus, Petros, and Nikolaos celebrate the miracle of their Savior s birth together one last time. And in remembrance of their Lord's greatest gift, one of them will make the ultimate sacrifice for the others...and a centuries-long tradition will be born.

My thoughts:
I have to say I really enjoy all of this author's books but for some reason I did not like this one as well. It is nothing to do with the writing style I just had a hard time getting into this time period and the story. It is really hard for me to say this as I do not like giving less than great reviews. This is a nice book to read during the Holiday season. While you read it it will help you to understand  how the Christmas tradition started.The characters were well developed in this story and it was nice getting to know each of them. It was also nice to hear about Nikolaos' story before he became a saint. There was a lot of good descriptions in this book so you could really get a sense of where it takes place as well as the feelings of each of the characters.

About the author:
Roseanna M. White pens her novels beneath her Betsy Ross flag, with her Jane Austen action figure watching over her. When not writing fiction, she’s homeschooling her two children, editing and designing, and pretending her house will clean itself. Roseanna has a slew of historical novels available, ranging from biblical fiction to American-set romances to her new British series. She lives with her family in West Virginia. Learn more at www.RoseannaMWhite.com
Posted by Angela - Bookaunt at Sunday, November 27, 2016