The Good, The Bad and The Guacamole by Rebecca Adler - Review and Guest Post 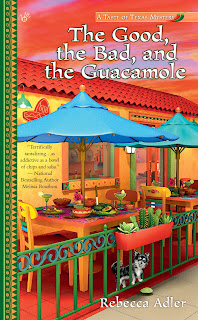 I voluntarily reviewed an ARC copy of this book

Synopsis:
Tex-Mex waitress and part-time reporter Josie Callahan is about to serve up some Lone Star justice in this spicy Taste of Texas Mystery from the author of Here Today, Gone Tamale.

Tourists are pouring into the town of Broken Boot for the annual Homestead Days Music Festival. Opening the celebration at Two Boots dance hall is smooth-talking country singer Jeff Clark, the ex-boyfriend of Josie’s best friend, Patti Perez. When the charming Clark woos Patti onstage in an attempt to rekindle some sparks with his old flame, Josie fears her friend will end up as just one more notch on the singer’s guitar strap.

To impress her editor at the Broken Boot Bugle, Josie and her Chihuahua, Lenny, pursue the singer to Patti’s house, hoping for an interview. Instead, they discover Clark facedown in a bowl of guacamole with a bloodied guitar at his side. With Patti suddenly a murder suspect, Josie must use her reporter skills to find out who had a chip on their shoulder—before the killer double dips….

My thoughts:
This is the first book in this series that I have read and even though it is a part of a series I was able to read it as a stand alone book. I loved the name of the town Broken Boot - I love thinking of reasons why a towned was named what it was. The Chihuahua Lenny was the cutest addition to this story and love that he has his own blog. It was nice that Josie's family is helping her fit back into the small town scene, they seem like a big happy family. It was nice to see that. Another thing I like about this author's writing was she made the characters so real. They could be a part of your own town or family. This book was a quick read and very enjoyable. I look forward to going back and reading book one and continuing on in the series. Oh and how can I forget the recipes - I am looking forward to trying them as I am a fan of Tex-Mex food.

About the author:
Rebecca Adler grew up on the sugar beaches of the Florida Gulf Coast. Drawn to the Big Apple by the sweet smell of wishful thinking, she studied acting on Broadway until a dark-eyed cowboy flung her over his saddle and hightailed it to the Southwest.

Prior to writing women’s fiction, Gina always found a way to add a touch of the dramatic to her life: dinner theatre in Mississippi, can-can club in Florida, and playing a giant Furskin in the New York Toy Fair, plus the occasional play and musical.

Where Does My Story Truly Begin?
When I sat down to write Here Today, Gone Tamale, the first book in my Taste of Texas series, I pondered the best way to take a hold of the story. Would it be the plot? The setting? The mystery? Sure the mystery was important. Who wants to read a book with a predictable plot? And though I loved Far West, Texas and the desert towns near the border, they didn’t reach out and grab me in the beginning.

Head bowed and eyes closed, I prayed like a child, “Dear Lord, how the heck do I write a story that will make readers smile and feel at home?” Now, you may not pray, and the good Lord knows I don’t pray as often as I should; but the answer dropped into my soul.

It was all about the characters. I decided to write lovable, quirky people I wanted to spend time with. I had to start with a heroine with grit and a bit of an attitude. She couldn’t be svelte and perfect either. She had to love her tamales.

Once reporter Josie Callahan came onto the page, I needed a reason for her to leave the cool vibe and big city bustle of Austin—every Texan’s dream—only to land back in postage-sized Broken Boot with her aunt and uncle. Josie was down on her luck. Laid off and jilted at the altar, she had nowhere else to go.

Now that my amateur sleuth was back home where she belonged, working in her family’s Tex-Mex restaurant who else was there for her to interact with?

Ah, her sidekick. That would be a chihuahua named Lenny. Why Lenny? Because that’s what his previous owner named him. Why a chihuahua? The story is set in Far West Texas, right? Now let’s give that stereotype a twist. He’s a long-haired Chi, which makes him extra cute and adorable.

Someone else was needed in the family, someone unpredictable and cantankerous. Someone who could say all the things the other characters wished they could say. Señora Mari hit the page. This mighty matriarch, standing all of four feet, ten inches, oversaw everything that had to do with the menu at Milagro especially her famous traditional tamales. Much to my surprise, it turned out Señora Mari dreamt of dead people. Those poor souls murdered in Broken Boot came to her with clues about their murders. Unfortunately, Josie couldn’t make hide or hair out of them.

Finally where would a smart, sassy amateur sleuth be without a hint of romance in her life? Enter from stage left Josie’s former college sweetheart, Coach Ryan Prescott. He’s not too busy coaching the West Texas University football team to help out at Milagro now and then and lend a sympathetic ear. Sneaking in from stage right is Deputy Quinton Lightfoot. He put the silent in the strong and silent type. Intelligent and skeptical of Josie’s investigative skills, he’s willing to overlook her mistakes as long as she doesn’t interfere with his investigation.

The stage was set. The dusty, artistic town of Broken Boot, Texas was the backdrop. Josie Callahan and the Martinez family were the leads. All I needed was a murder.

If you crave your Tex-Mex the way I do, check out the recipes in the back of my book. 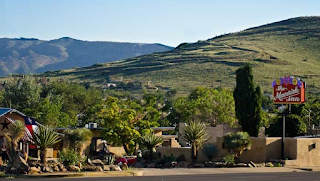