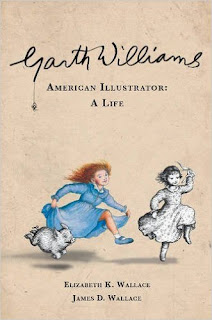 Synopsis:
Open the pages of so many children’s classics―Stuart Little, Charlotte’s Web, Mister Dog, The Cricket in Times Square, The Rescuers, the Little House books―and you will see page after page of the artistry that brought those stories to life. And behind the illustrations sparking the imagination of generations was a man who had an extraordinary existence.

Born in New York City in 1912, Williams was educated in England and trained on the continent. After enduring the Blitz in London, he returned to New York, where he encountered the vibrant art and cultural scene of the 1940s. He made his home first in New York, then Aspen, and finally Guanajuato, Mexico and was married four times. During his life he met people who shaped and exemplified the twentieth century: Winston Churchill, E. B. White and Ursula Nordstrom, Laura Ingalls Wilder, and countless more.

This is a biography of Garth Williams as an artist and an illustrator. It is the story of how his journey led him from winning sculpture awards at the Royal College of Art in London, to capturing the essence of frontier life in the American West, to rendering the humanity of beloved animal characters. The biography also explores the historical context that affected Williams’ life and art, both in the old world and the new. Against the frenetic pace of post-war suburbanization, Williams’ illustrations nurtured a connection with the animal world and with a vanishing agrarian life. By tapping into American themes, Williams spoke to a postwar yearning for simplicity.

Complete with more than 60 illustrations, this is the first full biography of Garth Williams written with the help and cooperation of his family.

My thoughts:
I have a few different thoughts on this book. To start with I really wanted to like it as he did the illustrations for my favorite author's series of all time - The Little House books. Because of that I wanted to know more about this illustrator. There were parts of this book that read really quickly for me like the chapter about the Little House books. I also enjoyed reading about how he came to illustrate Stuart Little and Charlotte's Web. It was also interesting to me that he illustrated a number of Golden Books. What I did not like was that many parts of this book was slow reading for me. In fact I put this book down at least twice and was not going to finish it but my curiosity got the best of me and I wanted to finish it. I will say I learned quite a bit about this man from the fact that he was married four different time one right after the other to the fact that he was from England, Canada as well as the US and in his adult life lived in Italy and Mexico. I really liked all of his illustrations that were included in this book. To sum it up it was an interesting book just a little dry for me.

About the authors:
Holding a Ph. D. from Columbia University, Elizabeth K. Wallace has taught British literature and culture at Boston College for more than 20 years. Her previous publications have addressed a broad range of topics from women writers to the origins of shopping, from representations of the slave trade to the television series Mad Men. She has loved the illustrations of Garth Williams since she was a small child, but she holds a special affection for his work in the Little House Series.

James D. Wallace is a scholar of American literature at Boston College, where has been on the faculty since 1985. Since receiving his doctorate from Columbia, he has published on a wide array of topics in American literature culture. He has enjoyed the opportunity to write this biography together with his wife as a way of keeping the extraordinary legacy of Garth Williams alive.
Posted by Angela - Bookaunt at Sunday, November 06, 2016