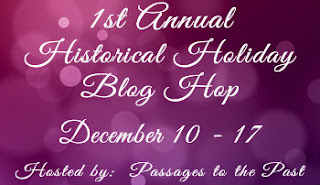 Welcome to the 1st Annual Historical Holiday Blog Hop, hosted by Passages to the Past!

I am a big fan of historical fiction so I thought this would be a fun giveaway to be a part of. There are going to be a lot of fun giveaways and many blogs for you to hop to and visit. My Giveaway is open to the US only. Sorry

Check out Passages to the Past for a complete list of authors, publishers and blog participating in the fun hop. Here are some of the wonderful prizes: