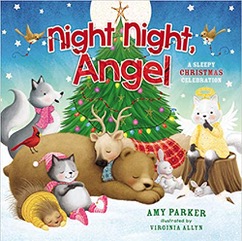 I received this book from the publisher.  All opinions are my own.
About the book
Publisher ‏ : ‎ Thomas Nelson (September 28, 2021)
Board book ‏ : ‎ 20 pages
ISBN-10 ‏ : ‎ 1400212839
ISBN-13 ‏ : ‎ 978-1400212835
Reading age ‏ : ‎ Baby - 4 years
Synopsis
Little fox loves all the excitement that Christmas brings to the forest: making creative presents, placing the star on the tree, and making sure she is spotlight-ready for the big Christmas play. But soon she realizes that the perfect gift has already been given through the baby who arrived on the first Christmas night!

As the fourth seasonal title in the hugely successful Night Night bedtime storybook brand, this Christmas board book
gives families a fun way to say goodnight during the Advent season
celebrates the special moments of family holiday activities
gently reminds children that Baby Jesus is the reason for the season

The Christmas theme and sparkling cover make Night Night, Angel perfect for an Advent gift, stocking stuffer, or Christmas morning surprise from parents, grandparents, Sunday school teachers, and friends. Your little angel will be ready to snuggle in for the night as together you celebrate the many blessings of Christmas!
My thoughts
I have not read the other books in the Night Night series, but this book can be read as a standalone. I read this book to my six month old grandson.  He loved holding the book and seeing the bright colors.  The story was cute to read to your little one and they learn a lesson while enjoying storytime.  This is one of his first Christmas books and may be to become a tradition to read it each year, 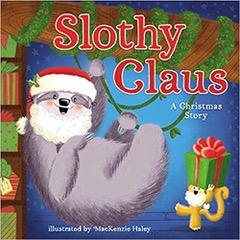 What will children do when a sluggish Slothy Claus doesn't make it to their home in time for Christmas morning? This charming story helps kids learn that Christmas is about more than just presents under the tree.

Slothy Claus has lots of presents for good boys and girls this year, but how is this notoriously lethargic animal supposed to travel all around the world in just one night? You guessed it! Slothy takes his sweet time, and when kids wake up to empty stockings and bare trees, it feels like Christmas is ruined! How will they ever find happiness without their chocolates and toys?

Slothy Claus is equal parts humorous and heartwarming. Children ages 4 to 8 will

Slothy Claus concludes with a summer scene complete with flip flops and a barbecue when Slothy Claus finally flies down in his sleigh to deliver gift after gift--for a special celebration of Christmas in July. With a bright, glittery cover, this fun picture book is the perfect gift for advent or Christmas.

My thoughts
What a cute book to read to your little one. I loved Slothy Clause. The pictures were nice and bright so my little grandson enjoyed looking at the pictures.  This one will be one that we read for many Christmases to come.
Posted by Angela - Bookaunt at Wednesday, November 10, 2021 No comments: 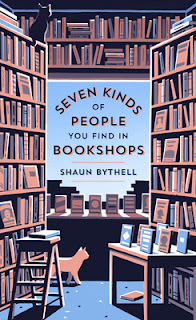 Seven Kinds of People You Find in Bookshops by Shaun Bythell
From behind the counter, Shaun Bythell catalogs the customers who roam his shop in Wigtown, Scotland. There's the Expert (divided into subspecies from the Bore to the Helpful Person), the Young Family (ranging from the Exhausted to the Aspirational), Occultists (from Conspiracy Theorist to Craft Woman).

Then there's the Loiterer (including the Erotica Browser and the Self-Published Author), the Bearded Pensioner (including the Lyrca Clad), and the The Not-So-Silent Traveller (the Whistler, Sniffer, Hummer, Farter, and Tutter). Two bonus sections include Staff and, finally, Perfect Customer--all add up to one of the funniest book about books you'll ever find.

My rating: It was ok. I listened to the audio version. 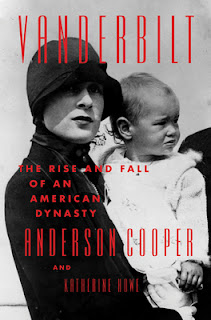 When eleven-year-old Cornelius Vanderbilt began to work on his father’s small boat ferrying supplies in New York Harbor at the beginning of the nineteenth century, no one could have imagined that one day he would, through ruthlessness, cunning, and a pathological desire for money, build two empires—one in shipping and another in railroads—that would make him the richest man in America. His staggering fortune was fought over by his heirs after his death in 1877, sowing familial discord that would never fully heal. Though his son Billy doubled the money left by “the Commodore,” subsequent generations competed to find new and ever more extraordinary ways of spending it. By 2018, when the last Vanderbilt was forced out of The Breakers—the seventy-room summer estate in Newport, Rhode Island, that Cornelius’s grandson and namesake had built—the family would have been unrecognizable to the tycoon who started it all.

Now, the Commodore’s great-great-great-grandson Anderson Cooper, joins with historian Katherine Howe to explore the story of his legendary family and their outsized influence. Cooper and Howe breathe life into the ancestors who built the family’s empire, basked in the Commodore’s wealth, hosted lavish galas, and became synonymous with unfettered American capitalism and high society. Moving from the hardscrabble wharves of old Manhattan to the lavish drawing rooms of Gilded Age Fifth Avenue, from the ornate summer palaces of Newport to the courts of Europe, and all the way to modern-day New York, Cooper and Howe wryly recount the triumphs and tragedies of an American dynasty unlike any other.

Written with a unique insider’s viewpoint, this is a rollicking, quintessentially American history as remarkable as the family it so vividly captures.

My rating: I really enjoyed listening to this book. 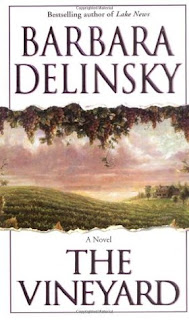 The Vineyard by Barbara Delinsky
In The Vineyard, New York Times bestselling author Barbara Delinsky (Lake News, Coast Road, Three Wishes) has written her most complex and emotionally rewarding novel: a story of two women, a generation apart, each of whose dream becomes bound with the other's.

To her family, Natalie Seebring is a woman who prizes appearances. She is exquisitely mannered, socially adept, a supportive wife, and head of a successful wine-producing enterprise. So when she announces plans to marry a vineyard employee mere months after the death of her husband of fifty-eight years, her son and daughter are stunned. Faced with their disapproval, Natalie decides to write a memoir. There is much that her children don't know about her life -- about her love of the vineyard, her role in fighting to build it up, and the sacrifices she made for her family.

Olivia Jones is a dreamer, living vicariously through the old photographs she restores. She and her daughter, Tess, have no one but themselves, so they cling to the fantasy that a big, happy family is out there somewhere, just waiting to welcome them home. When Olivia is hired by Natalie to help with her memoir, a summer at Natalie's beautiful vineyard by the sea seems the perfect opportunity to live out that fantasy -- an elegant home by the shore, a salary that allows her to hire a tutor for her dyslexic daughter, a job that is creative, hours spent with a woman who has led a charmed life.

But all is not as it seems, Olivia and Tess discover when they arrive at Asquonset, the vineyard in Rhode Island. While welcoming, Natalie is not quite the mothering type, as is quickly evident in the hostility her daughter and son have toward her -- it's a hostility that Olivia must buffer. Another dose of stark reality comes in the form of Simon Burke, who runs the vineyard's day-to-day operation and sees in Olivia and Tess an unwelcome reminder of the wife and daughter he tragically lost. And then there is the cruel reality of Olivia's own life -- the mother who never wanted her, and a career that has floundered.

Natalie's story, intended for her own children, enlightens Olivia as well. The lives of these two women of different generations, parallel in so many ways, become, in The Vineyard, a powerful and moving story as the fantasy of an idealized life, complete with perfect romance, crashes headlong into reality.

My rating: This was my favorite read this month. I read the paperback book that is a re-release.

The Wedding Crasher and the Cowboy by Robin Bielman - Review 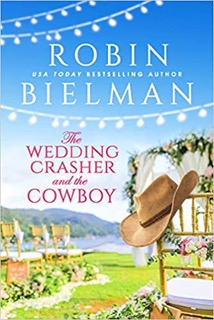 I received this book from the publiser. All opinions are my own.
About the book
Publisher ‏ : ‎ Entangled: Amara (October 26, 2021)
Mass Market Paperback ‏ : ‎ 368 pages
ISBN-10 ‏ : ‎ 1649370946
ISBN-13 ‏ : ‎ 978-1649370945
Synopsis
Kennedy Martin is shocked when her ex calls days before his wedding, expressing serious second thoughts. Doesn’t he see his fiancée’s actually the glaze to his doughnut? Now she’s got no choice but to crash his wedding and convince the man he’s with the right woman.

Instead, she crashes into the absolute last man she ever wanted to see: Maverick Owens, her old college nemesis. Maverick is still as awful, infuriating, and just The Worst as ever?even if he looks way too sexy in his cowboy hat. And of course he’s convinced she’s actually at the seaside ranch to ruin the wedding.

Now the only way to get some face time with the groom and save this marriage is to participate in all sorts of pre-wedding events…with Maverick. Stuck on a canoe, making small-talk at cocktail hour, and even a hoedown with her worst enemy? This just might be the longest week of her life…

Meet the author - Robin Bielman
USA Today bestselling author Robin Bielman lives in Southern California with her awesome family and her very cute dog, Harry. She writes both sweet and sexy contemporary romances with one goal in mind: to leave you with a smile on your face. When not attached to her laptop, she loves to read, go to the beach, and frequent coffee shops with friends. She also dreams of traveling to faraway places and loves to connect with readers. Keep in touch on social! xoxo

My thoughts
This was a new to me author and I enjoyed this book. It was nice light read for me after finishing a large biography. The characters were likeable. Maverck is one of those people that you love to hate and then in the end he grows on you and you love him. I like how the author's writing makes you feel a range of emotions while reading this. The ending was perfect for me. I will be checking out more of this author's book.