The Clan of the Cave Bear by Jean Auel

This novel of awesome beauty and power is a moving saga about people, relationships, and the boundaries of love. Through Jean M. Auel’s magnificent storytelling we are taken back to the dawn of modern humans, and with a girl named Ayla we are swept up in the harsh and beautiful Ice Age world they shared with the ones who called themselves the Clan of the Cave Bear.

A natural disaster leaves the young girl wandering alone in an unfamiliar and dangerous land until she is found by a woman of the Clan, people very different from her own kind. To them, blond, blue-eyed Ayla looks peculiar and ugly--she is one of the Others, those who have moved into their ancient homeland; but Iza cannot leave the girl to die and takes her with them. Iza and Creb, the old Mog-ur, grow to love her, and as Ayla learns the ways of the Clan and Iza’s way of healing, most come to accept her. But the brutal and proud youth who is destined to become their next leader sees her differences as a threat to his authority. He develops a deep and abiding hatred for the strange girl of the Others who lives in their midst, and is determined to get his revenge. - Taken from Amazon.com
I tried to read this book years ago when it was all the rage and just could not get into but the book sounded so good to me that I wanted to give it another try. So I thought why not listen to it since I have plenty of time at work to do this. Well I am glad I did. It did not move along as fast as I thought it would but I did enjoy it. It only took me two and a half days to listen to it. I plan on listening to the second book next week. I like how the clan ended up accepting Ayla into their clan. I also liked how Iza, Creb and Ayla formed their own little family. I did not like the one guy treated her (I do not know how to spell his name and since I listened to it, I can't look it up). 3 1/2 stars
Posted by Angela - Bookaunt at Wednesday, November 30, 2011 1 comment:

The Christmas Note by Donna VanLiere

Gretchen Daniels has recently moved into a condo with her two children to be closer to her mother, Miriam. She and her children are building a life together in a new community. A mysterious young woman, Melissa McCreary, lives next door to them. She has few possessions, little personality, and keeps to herself. One day a local landlord who is looking for Melissa knocks on Gretchen's door for assistance. Melissa's mother has died and in the coming weeks the landlord needs Melissa to empty her mother's apartment. Gretchen reaches out and offers to help Melissa, but the apartment is a gut-wrenching shambles of a home. There is little worth saving except for a few photos and a note that is discovered on the crate beside the bed. It is unfinished, but in the two scribbled lines Melissa discovers secrets about her family that she never could have imagined. can two very different women embark on a journey that explores a long-buried need for forgiveness, hope and redemption? Taken from the dust jacket of the book

I really enjoyed this book. It has been a little while since I have read a book by Donna but I am glad I did and now need to go back and read the other books in the Christmas series that I have not read yet. I really enjoyed Melissa and Gretchen. I love how Gretchen got Melissa to come out of her shell. I also love the few little surprises that happen in this book. I can't say more about that without spoiling the book. I also thought the way Miriam and Gloria got along was the funniest thing. The only thing I did not like about the book was it kind of left me hanging at the end but in a good way. Great fast fun holiday read. 5 Stars


FTC DISCLOSURE:I received this book in return for a fair and honest review.
Posted by Angela - Bookaunt at Saturday, November 26, 2011 1 comment:

Email ThisBlogThis!Share to TwitterShare to FacebookShare to Pinterest
Labels: Christmas

What is it about men anyway? Bad cars, bad jobs, even bad teeth -- nothing convinces them that they can't snare a size two babe with a d-cup chest. And after way too many internet dates with men named "luvstick" and "bigdaddy182" Lucy Rothschild should know.

But sitting across from her now is "hardluvnman" and he seems different -- sensitive, honest, and hot! He says he's a plumber, while Lucy claims she's a nurse! She's really a mystery writer, dating online while researching her next book. Hey, everyone lies a little, don't they?

But Quinn's really an undercover cop hunting down a serial killer, and he sees Lucy as hes top suspect. And while he could really go for this smart, sexy woman with the with the killer bod -- if that's the only thing "killer" about her -- he knows he needs to wine and dine her and discover the truth. Hey, he realizes the dating scene can be deadly -- but this is ridiculous!

I thought this was a nice fun book to read. I did not really know what to expect when I first started reading it. I guess I thought it would be a chick lit book but was pleasantly surprised when I found a mystery book instead with some chick lit mixed in. I enjoyed the main character in this book a lot - she is someone you could be friends with. I think this will be a fun series to continue on with. 4 Stars

Naughty in Nice by Rhys Bowen

Why should my clueless brother, Binky, and his decidedly disagreeable wife Fig, be the only ones to enjoy the fun and sun of the French Riviera? Though they are disinclined to invite me along. Her Majesty the Queen once again come to my rescue. she is sending me off to Nice with a secret assignment that's nothing to sneeze at -- recover her priceless, stolen snuffbox from the disreputable Sir Toby Groper.


As much of an honor as it is to be trusted by Her Majesty, an even greater honor is bestowed upon me in Nice -- none other than Coco Chanel herself asks me to model her latest fashion. Unfortunately, things go disastrously wrong on the catwalk.


And before I can snatch the snuffbox, someone's life is snuffed out in a very dastardly way. With a murderer on the loose -- and my dearest Darcy seen in the company of another woman - how's a girl to find any time to go to the casino? - copied from the bookcover

Another good installment to a fun series. I enjoyed this book. It is always fun to see what kind of trouble Georgie can get herself into. One thing that is driving me crazy Darcy and Georgie. I wish they would hurry up and get over their little "issues/problems" and get together. I like how in this book Georgie seem to get closer to her mum. 4 Stars
Posted by Angela - Bookaunt at Sunday, November 13, 2011 4 comments: 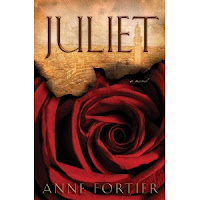 Twenty-five-year-old Julie Jacobs is heartbroken over the death of her beloved aunt Rose. But the shock goes even deeper when she learns that the woman who has been like a mother to her has left her entire estate to Julie’s twin sister. The only thing Julie receives is a key—one carried by her mother on the day she herself died—to a safety-deposit box in Siena, Italy.

This key sends Julie on a journey that will change her life forever—a journey into the troubled past of her ancestor Giulietta Tolomei. In 1340, still reeling from the slaughter of her parents, Giulietta was smuggled into Siena, where she met a young man named Romeo. Their ill-fated love turned medieval Siena upside-down and went on to inspire generations of poets and artists, the story reaching its pinnacle in Shakespeare’s famous tragedy.

But six centuries have a way of catching up to the present, and Julie gradually begins to discover that here, in this ancient city, the past and present are hard to tell apart. The deeper she delves into the history of Romeo and Giulietta, and the closer she gets to the treasure they allegedly left behind, the greater the danger surrounding her—superstitions, ancient hostilities, and personal vendettas. As Julie crosses paths with the descendants of the families involved in the unforgettable blood feud, she begins to fear that the notorious curse—“A plague on both your houses!”—is still at work, and that she is destined to be its next target. Only someone like Romeo, it seems, could save her from this dreaded fate, but his story ended long ago. Or did it? - copied from Amazon.com

I enjoyed listening to this book. I like how the book makes Romeo & Juliet into real people and not just a story. I also enjoyed the mystery of the story and how Julie is looking for the treasure/history of her family and the real story behind Romeo and Juliet. The more I listened to the book the more the mystery twists and turns. Just when you think you have it figured out up comes another twist. It was also nice that you got the original story of Romeo and Juliet and then the modern/real story. Very enjoyable book. 4 stars