Book details
Sand Dollar Lane by Sheila Roberts
Moonlight Harbor #6
Publisher ‏ : ‎ MIRA; Original edition (April 26, 2022)
Mass Market Paperback ‏ : ‎ 368 pages
ISBN-10 ‏ : ‎ 077838635X
ISBN-13 ‏ : ‎ 978-0778386353
Book description
Brody Green is finding it hard to recover after being dumped by his fiancée, Jenna Jones, then watching her walk down the aisle with someone else. Jenna is determined to make up for her love defection and find him the perfect woman, but Brody is done with love. First a divorce, then a broken engagement. From now on he’s keeping things light, no commitments. Luckily Brody’s business is booming. Beach Dreams Realty is the best real estate company in town. And the only one. Until…

Lucy Holmes needs a new start. In business, in love, in…everything. If ever there was a cliché, it was her life back in Seattle. She was a real estate broker working with her husband until she caught him trying out the walk-in shower in a luxury condo—with another agent. She’s always been the more successful of the two, and with him gone, she’s determined to build a business even bigger than what she had. Moonlight Harbor is a charming town and it has only one real estate agency. Surely there’s room for a little competition.

Or not. Looks like it’s going to be a hot market in Moonlight Harbor. And maybe these two competitors will make some heat of their own.
Meet the author - Sheila Roberts
Sheila Roberts lives on a lake in the Pacific Northwest. Her novels have been published in several languages. Her book, Angel Lane, was an Amazon Top Ten Romance pick for 2009. Her holiday perennial, On Strike for Christmas, was made into a movie for the Lifetime Movie Network and her novel, The Nine Lives of Christmas, was made into a movie for Hallmark . You can visit Sheila on Twitter and Facebook or at her website (http://www.sheilasplace.com).
My thoughts
I love getting to visit Moonlight Harbor and reading about all my old friends.  Sheila's books always make me smile as I am reading them.  She also does such a good job in the details of everything and makes you want to run away and visit or live in Moonlight Harbor.  It is such a lovely place with such good people. I felt so sorry for Brody and was hoping he would find some happiness and the perfect mate for him. I enjoyed getting to meet Lucy.  I look forward to reading all of Sheila's books and I highly recommend them.
Posted by Angela - Bookaunt at Wednesday, April 27, 2022 No comments:

I received this book free from the author, all opinions are my own.
Book details
Simmering with Resentment by Daryl Wood Gerber
Cookbook Nook Mystery #11
Published April 26th, 2022
263 pages, paperback
ISBN: 9781954717916
Book description
With Bride’s Dream Expo in town, it’s all things wedding in Crystal Cove, including at the Cookbook Nook, where owner Jenna Hart is preparing for her own wedding in just a few short weeks. But there’s a dark cloud hanging over the festive mood by the name of Sarita Strachline, a woman Jenna helped convict of arson who is now out of jail and bent on revenge. And when Jenna and Rhett’s intimate prenuptial dinner is rocked by an explosion that nearly takes Rhett’s life, Jenna can’t help but think Sarita is to blame.

Desperate to prove Sarita’s guilt but consumed by worries over Rhett’s condition, Jenna reluctantly lays her case out for the police and leaves the investigation in their methodical hands. Still, she can’t help piecing together the clues, and as the evidence begins to mount, Jenna realizes that revenge may be a dish best served cold, but she can cook up a scheme of her own to bring the culprit to justice—she just has to hope it doesn’t blow up in her face . . .

Includes mouthwatering recipes!
Meet the author - Daryl Wood Gerber
Agatha Award–winning and nationally bestselling author Daryl Wood Gerber is the author of the Cookbook Nook Mysteries, the Fairy Garden Mysteries, the French Bistro Mysteries, the Cheese Shop Mysteries (as Avery Aames), the Aspen Adams Novels of Suspense, and two other stand-alone suspense thrillers. Little known facts about Daryl are that she’s jumped out of a perfectly good airplane, has hitchhiked around Ireland by herself, and has appeared on an episode of Murder, She Wrote. She loves to read, cook, and golf, and has a frisky Goldendoodle named Sparky who keeps her in line!
https://darylwoodgerber.com/contact-media/
My thoughts
This is another fun installment in one of my favorite series. I always like coming back to Crystal Cove to see what Jenna has gotten herself into now. I liked that the wedding expo and Jenna planning her own wedding were the setting/theme of this book. There is a lot going on this book, multiple crimes being committed and the planning of the wedding, and it makes the book read that much faster. This also made it a little harder to figure out who committed the murder. I like it when it is a challenge to solve the murder along with the main character. I look forward to the next book in this series.

Blood on the Bayou by Douglas J. Wood - A review 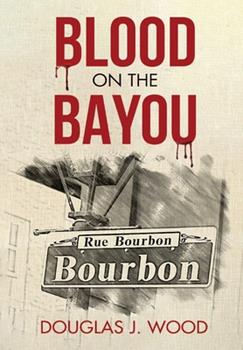 Blood on the Bayou by Douglas Wood
386 pages - Paperback
Published: April 12, 2022
ISBN: 173488486X
About the book:
The Murder Accountability Project, a nonprofit that analyzes FBI data, estimates that there are as many as 2,000 serial killers responsible for the 185,000 unsolved murders in the United States. According to the FBI there could be as many as fifty active serial killers prowling for victims every day. Most of them will never be caught. - Douglas J. Wood

A serial killer is terrorizing the streets of the French Quarter in New Orleans. The victims are found with their throats slit, odd symbols on their faces, and a wooden cross in their hands. Detective Rebecca Simone and her team are working the case and when DNA from a local man is found on a body, it looks like the mystery is solved. However, someone in Washington D.C. has been quietly observing, and he is not satisfied with the outcome of the case. Unable to remain an outsider, Special Agent Christopher DiMeglio packs his bags and heads down to an unfamiliar city and an unwelcoming New Orleans police department.

Full of dark alleys and urban legends of voodoo, vampires, and hidden secrets, New Orleans is the perfect setting for a killer to get away with murder. Blood on the Bayou is a gripping mystery with a shocking twist that will leave readers guessing until the very end.
Meet the author - Douglas J. Wood:
Douglas J. Wood is Senior Counsel at the law firm of Reed Smith LLP, he has over 45 years of experience practicing entertainment and media law, often imparting knowledge gained from his career in his books. Listed among the leading global specialists in advertising law in Chambers, the Legal 500, The Best Lawyers in America, and Super Lawyers, he is known and respected worldwide and is a member of the Legal 500 Hall of Fame. He received his BA from the University of Rhode Island, his Juris Doctor from the Franklin Pierce Law Center, a Masters of Law in Trade Regulation from New York University School of Law, and an Honorary Doctor of Laws from the University of New Hampshire. Doug has been adjunct professor of advertising law at the UNH Franklin Pierce School of Law and the University College Cork in Ireland.

He is the author of the award-winning Samantha Harrison political trilogy. In 2018, he published his memoir, Asshole Attorney: Memories, Musings, and Missteps in A 40-Year Career (winner of the 2019 Independent Press Award for Best Humor and Wit). In the following year, he added Dark Data: Control, Alt, Delete, a thriller about cyberwar and financial terrorism and winner of the 2020 Independent Press Award for Best Political Thriller. Doug’s newest novel, Dragon on the Far Side of the Moon, a thriller that pits China and the United States in conquest of the Moon, was published this past summer to rave reviews. His other non-fiction titles include 101 Things I Want to Say…the Collection, a book of fatherly advice to his children and the best-selling text Please Be Ad-Vised: A Legal Reference Guide for the Advertising Executive, now in its seventh edition and described by Bob Liodice, CEO of the Association of National Advertisers, as the legal bible for the industry. He is currently working on his next novel, Blood on the Bayou, a criminal thriller set in the sultry streets of New Orleans’ French Quarter. Look for that in 2022.

Doug lives in North Carolina with Carol Ann, his wife of 48 years. They are blessed with three grown children and four adorable grandchildren.
My thoughts:
Another new to me author and another enjoyable book.  I liked how the book/author embraced some of the New Orleans culture and waves it into the story.  The author did a good job of keeping me guessing until the end of the book.  It was an engrossing story that kep me reading late into the night.
Posted by Angela - Bookaunt at Monday, April 11, 2022 No comments: