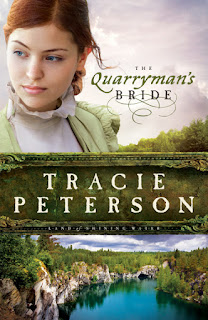 Summary: Emmalyne Knox has always loved Tavin MacLachlan. But when tragedy strikes her family, Emmalyne's father declares she can no longer marry. Despite Tavin's pleas to defy the decision, Emmalyne refuses. In her act of obedience, she gives up the future she'd always dreamed of.
When Emmalyne's father returns to the quarry business years later, Tavin and Emmalyn meet again. And though circumstances have changed in both of their lives, they cannot deny the feeling that still exist. Can Emmalyne find a way to heal the decade-long wound that that has fractured the two families... and change the hearts of those who stand in the way of true love?

My review: Tracie has another winner with this book. As with all the books I have read by Tracie this is another that I could not put down. Her books read very quickly for me and I think some of it is because she makes the characters really come to life. This book offers a bit of history, a bit of romance and a bit of the spiritual aspect and when all combined make for a great read. I felt for Emmalyne giving up her dream to marry when her father said to after tragedy struck. But she is given a second chance at love when she meets Tavin again. I did not like her father so much but then I think he may have been trying to do what he thought was right for his family. I look forward to the next book in this series.


Meet Tracie:
Tracie Peterson is the award-winning author of over eighty novels, both historical and contemporary. Her avid research resonates in her stories, as seen in her bestselling Heirs of Montana, and Alaskan Quest series. Tracie and her family make their home in Montana.
Visit Tracie's Web site at www.traciepeterson.com

Here is the link to the rest of the tour: Tour for The Quarryman's Bride
Posted by Angela - Bookaunt at Saturday, June 29, 2013