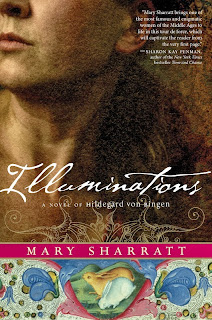 Synopsis: Illuminations chronicles the life of Hildegard von Biingen (1098-1179), who was tithed to the church at the age of eight and expected to live out her days in silent submission as teh handmaiden of a renowned but disturbed young nun, Jutta von Sponheim. Instead, Hildegard rejected Jutta's masochistic piety and found comfort and grace in studying books, growing herbs, and rejoicing in her own secret visions of the divine. When Jutta died some three decades later, Hildegard broke out of her prision with the heavenly calling to speak and write about her visions and to liberate her sisters and herself from the soul-destroying anchorage.
Like Anita Diamant's portrayal of Dinah in The Red Tent, Mary Sharratt interweaves historical research with psychological insight and vivid imagination to write an engaging and triumphant portrait of a courageous and remarkably resilient woman and the life she might have lived. Deeply affecting, Illuminations is a testament to the power of faith, love, and self-creation.

My review: This book was a very interesting book to me. I had not heard of Hildegard before I picked up this book but I thought it would be an interesting read. Mary does a good job in developing the characters throughout the entire book. I also like the author's description of the scenes so you can feel as if you are there and can see what the characters see. The visions was something different for me and sometimes I had a hard time with them but I think they were an important part of the story. I can't imagine being sent away from home at the age of eight to become a nun and live in the monestary. The story of Hildegard's life was a very intriguing one to read about.