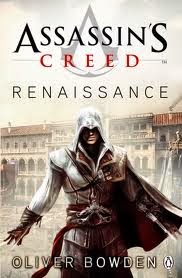 Synopsis; Betrayed by the ruling families of Italy, a young man embarks upon an epic quest for vengeance. To eradicate corruption and restore his family's honor, he will learn the art of the Assassins.

Along the way, Ezio will call upon the wisdom of such great minds as Leonardo da Vinci and Niccolo Machiavelli -- knowing that survival is bound to the skills by which he must live.

My review: I have to say this is the last book I thought I would pickup seeing as it is based on a video game but I for one am glad I did. When I saw the lastest commercial for the newest version of the video game I thought it looked good, then one day I was in the store and saw the newest book it also looked good and then I saw it was part of a series, so I went and found book one. I think what appeals most to me is the historical aspect to the story. Once I picked this book up I could not put it down and yes I have already purchased the second book in the series. The weapons that they create in this book are pretty cool. Of course Ezio was my hero throughout the book, I enjoyed meeting the whole cast of characters and found myself routing for the assassin as he is kind of a Robin Hood type of character. I am looking forward to the next book to see what the next mission is.
Posted by Angela - Bookaunt at Tuesday, February 11, 2014