Please welcome Rhys Bowen to my blog. She writes some great cozy mysteries that I think you will enjoy. 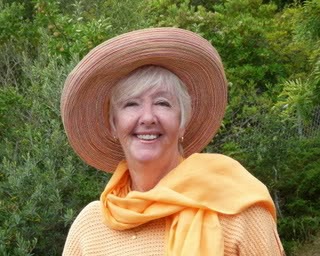 What made you decide to write cozy mysteries?
I write stories that I want to tell, books that I want to read and are not on the shelf. I really don't like the term "cozy" as I feel it makes traditional/non-violent mysteries seem smaller and less important than the dark and violent ones. My Royal Spyness series may be light but it is never slight. It always has a solid historical underpinnings. And Molly Murphy -- well, they are not so cozy!

How do you come up with the names of the characters for your books?
Molly came into being because I wanted to write a strong, first person female who wasn't always wise and didn't always know when to shut up (maybe a little like me?). Lady Georgie was born when my editor wanted me to write big dark books and I knew I wanted a really fun series instead. I tried to think who was the most unlikely sleuth and decided royal but penniless would be a lot of fun.

Who designs your covers? Do you get any influence on them?
The art department at my publishers design the covers. They run the sketches past me and I get considerable feed back. I have loved all of them.

I know this question is asked a lot but where do you get your ideas for your books and how long does it take you to do your research?
The more you write, the more ideas pop into your head. Sometimes it is a snippet of news I hear, sometimes something I read about in the past, sometimes just thinking "wouldn't it be fun if..." I do lots of research, especially for the Molly books in early New York. I read, I look at photos, I walk the street of New York that Molly walked. For Lady Georgie I am in England a lot. I know people who own the sort of country houses where Georgie might stay. I list to older people talking. One of the advantages of marrying into an upper-class family!

What keeps you focused when you are writing?
That contract with the word "Deadline" in it. Knowing I have to complete a book in three months keeps my nose to the grindstone.

Who is your favorite character and why? How about your least favorite character and why?
I am rather fond of Georgie's grandfather. He has no pretentions, but neither is he daunted by her high status. He's based on my own father. I'm also really fond of Sid and Gus in the Molly books. Of course I adore Darcy (who wouldn't?) And my least favorite is clearly Fig. I can't stand mean-spirited people.

What can we expect from you in the future?
Great things, I hope! But seriously -- my next Molly book comes out on March 4th and is called City of Darkness and Light. A lot of fun to write as I take Molly to Paris and the post-Impressionist art world. And then in August is the next Royal Spyness book, called Queen of Hearts. Georgie crosses the Atlantic and finds herself in Hollywood. Obviously this is my year for traveling.

What is a favorite book or author you like to read or would like to recommend to your readers?
The funny thing is that my favorite authors are also my close friends. Louise Penny, Deborah Crombie and Jacqueline Winspear all write fabulous books and are all dear dear friends.

Who or what influenced your love of books?
My great aunt. She was a voracious reader and told e the stories of her favorite books long before I could read them. I grew up knowing Dickens by heart.

Is there someone who encourages you most in your writing? Who is it and how do they influence you?
Yes, my fans. I am awed by letters I get from people who are battling cancer, coping with a loss, and say that my books have helped them trough a difficult time.

When you are not writing what do you like to do?
I love to sing, to paint, to travel, to hike. I wish there were more hours in a day.

List five random things about yourself.
I used to sing in an opera chorus
I love oysters and all seafood
I can beat my family at ping pong
I think family and friends are the best things in life
I'm addicted to Downton Abbey

You can pre-order Queen of Hearts at Amazon (click here)

Here is a little more in depth bio of Rhys (taken from her website): Rhys Bowen was born in Bath, England, of a family that was half Welsh, half English. She was educated at London University and then began her career with the BBC, where she became a drama studio manager. She had made up stories all her life. While working on a boring play she decided to write a play of her own. With the bravado of a 22 year old she marched into the office of the head of BBC drama and handed him the script. Two days later he summoned her and told her that they were going to produce the play..  Rhys has never looked back.
The British climate forced Rhys to escape to Australia where she worked for Australian Broadcasting before meeting her future husband, a fellow Brit who was on his way to California. So Rhys packed up again and found herself in San Francisco where she settled and has lived ever since, raising four children.
Finding nothing like the BBC in San Francisco, Rhys turned to writing children’s books under her married name, Janet Quin-Harkin. Her first picture book was an immediate success and won several awards. More picture books followed, then her agent asked her to write a book for young adults. This was a turning point in Rhys’s career. Her first young adult novel was an instant hit. By her third she was selling half a million copies. Many more popular YA novels followed until Rhys decided she had said all she wanted to say about teenage love and angst, and she turned her real love—mysteries.
The sort of books she loves to read are those with a great sense of time and place. So she considered where to set a series of her own and chose the mountains of North Wales, where she had spent many happy childhood vacations and used her grandfather’s name as her nom de plume. Constable Evan Evans was the hero of these novels that took place in a tiny fictitious village in Snowdonia. The series was well received from the start. The second book, Evan Help Us, was nominated for a Barry Award. Evan’s Gate achieved the ultimate success when it was nominated for the Edgar best novel—the highest prize in mysterydom.
But it was a chance visit to Ellis Island that made Rhys start thinking in a new direction. The spunky and not always wise Molly Murphy came into her head, fleeing from Ireland and finding herself implicated in a murder on Ellis Island in the first book, MURPHY”S LAW. This book won the Agatha Best Novel award, plus three others. Every subsequent book in the series has received awards, nominations and glowing reviews.  Book eleven, HUSH NOW, DON’T YOU CRY, was published in March 2012 and went straight to the New York Times bestseller list.
Never one to rest on her laurels Rhys reacted to the gloom and doom of real life by creating a second heroine—this one aimed to amuse. She is Lady Georgiana, 34th in line to the British throne but utterly penniless and struggling to make her own way in the cruel world of the Great Depression. Her Royal Spyness was a bestseller, nominated for many awards and instantly endeared readers to her heroine. The following books have all received award nominations. The 2011 book, Naughty in Nice started off with a starred review from Publisher’s Weekly and was then nominated for an Agatha, Bruce Alexander and RT Reviews award. The audio version is also nominated for an Audie. In April 2012 it won the Agatha Award for best historical mystery.
Rhys is listed in Who’s Who in America under her married name, Janet Quin-Harkin
As well as novels Rhys has written many short stories, including an Anthony winner. She is an ex chapter president of Mystery Writers of America. When not writing she loves to travel, sing, hike, paint, play her Celtic harp and spoil her grandchildren.