The Ransom by Marylu Tyndall 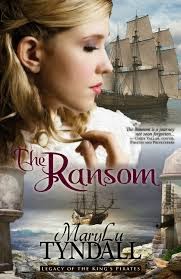 Synopsis: Port Royal, Jamaica 1692
Living in a city deemed the wickedest in the world is no easy task for Miss Juliana Dutton. To make matters worse, with an ailing father and a drunken fool for a brother, she is forced to take over the running of the family business in order to survive. When a nosey suitor threatens everything, she spurns him and instead becomes engaged to the town idiot, Lord Munthrope. But is he an idiot? The more her problems push her closer to the man, the more she realizes he is not who he seems.Alexander Hyde, the Pirate Earl, is the most feared pirate in the Caribbean--feared, successful, wealthy, handsome, and bored, so terribly bored. When an unexpected event allows him to get close to Juliana, a woman he has loved from afar for years, he takes it. But leading a double life causes more problems than it's worth.  A restless crew and a long-time enemy out to capture and hang Alex, put Juliana in grave danger.As tremors rock the city of Port Royal, Juliana's faith in God is equally shaken. Not only have things gotten worse, but she is confused by her feelings for both Munthrope and the Pirate Earl. Deception, intrigue, mutiny, death, betrayal, all attempt to tear the lovers apart. But the final blow comes when a massive earthquake strikes the city and threatens to sink it into the sea.

My review: I am such a fan of MaryLu's so was happy that she wrote another book for us to enjoy. The way she writes about pirates makes me like the even more than I did before, there is something intriguing about a pirate and then when they do something good makes them even more appealing. This book was full of a lot of twists that keeps you turning the page to find out what is going to happen next. MaryLu did a great job of developing the characters in this book and I don't know if I could pick a favorite one. There is a little of everything in this book: romance, history, excitement, humor, grief and adventure. What more could you ask for? I unfortunately have not read the other books in this series yet but was able to enjoy this book just the same. You do not have to have read the others first, although I will be going back and getting the others. I recommend this book for historical fans and christian fiction fans alike.
Posted by Angela - Bookaunt at Saturday, April 19, 2014