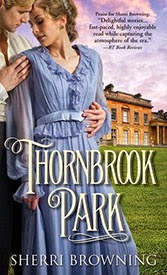 Synopsis: In a world poised for epic change...

Disowned for marrying beneath her, Eve Kendal has returned to England destitute after her husband's death and the mysterious disappearance of their savings. She's looking for survival, not romance. But from London to the Yorkshire countryside to the elegant estate of Thornbrook Park, Eve's path seems destined to cross that of the dashing but violent Captain Marcus Thorne.
Anything can happen...
For Marcus, a return home means facing the demons that drove him to war in the first place. As he and Eve begin a steamy affair, tensions that had been simmering just beneath the surface threaten to explode and shake the very foundations of Thornbrook Park.

My review: I have to admit I am not quite done reading this book so I am just going to post a short review but will be back in a few days to post a longer one. I am chapter seven so maybe about a fourth of the way through the book and I am really enjoying this book. Eve is someone I could imagine being friends with - she is such a nice person and one of my favorite characters. Marcus so far so good with him as well, I am anxious to learn more about him and how his character develops Sophia I do not care for that much, there is just something about her that I just don't like. I think she thinks she is better than everyone. Agatha she is cracking me up and I hope she plays a part throughout the whole book. I can't wait to work my way through the rest of this book.

a Rafflecopter giveaway
Posted by Angela - Bookaunt at Friday, June 06, 2014