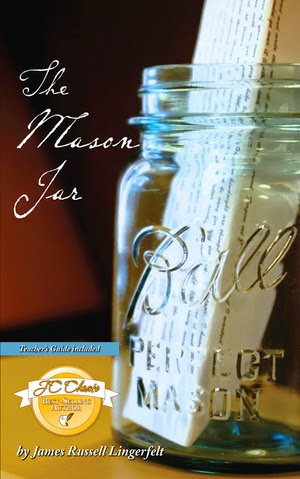 I received this book in exchange for a fair and  honest review.
The Mason Jar by James Russell Lingerfelt
ISBN: 9780984476633
Trade Paperback

Synopsis: What if your old college roommate called, raving about a book someone sent her, calling it the most beautiful book she’s ever read? “But,” she said, “it’s about you.” The author is your college ex.

In The Mason Jar, Clayton Fincannon is a Tennessee farm boy raised at the feet of his grandfather. He and his grandfather leave letters for each other in a Mason jar on his grandfather’s desk—letters of counsel and affirmation. When Clayton attends college in Southern California, he meets and falls in love with a dark debutante from Colorado. However, when an unmentioned past resurrects in her life and she leaves, Clayton is left with unanswered questions.
Clayton goes on to serve as a missionary in Africa, while he and his grandfather continue their tradition of writing letters. When Clayton returns home five years later to bury his grandfather, he searches for answers pertaining to the loss of the young woman he once loved. Little does Clayton know, the answers await him in the broken Mason jar.
A story about a girl who vanished, a former love who wrote a book about her, and a reunion they never imagined.
Written for the bruised and broken, The Mason Jar is an inspirational romance that brings hope to people who have experienced disappointment in life due to separation from loved ones. With a redemptive ending that encourages us to love again and written in the fresh, romantic tones of Nicholas Sparks, The Mason Jar interweaves the imagery of Thoreau with the adventures and climatic family struggles common to Dances with Wolves, A River Runs Through It,and Legends of the Fall.
My review: This was an enjoyable book to read. I like the detail the author put into it, which made you feel as if you were a part of the book. It was fun reading the advice from Finn's grandpa and is advice we could all use at times. In fact there are a lot of lessons throughout this book that we can learn from. This was a nice romantic book without being mushy.  Another thing unique about this book is that it is told from a mans point of view. I recommend this book to everyone.
Purchase a copy: http://ow.ly/C52aq
About the author:

James Russell Lingerfelt is the author of The Mason Jar and writes articles forThe Huffington Post. James connects with readers at his blog, Love Story from the Male Perspective, and divides his time between Southern California and his family's ranch in Alabama.

Be sure to check out Litefuse (click here) to see the rest of the stops on the book tour.

James Russell Lingerfelt's debut novel, The Mason Jar, is hot-off-the-press and causing quite the buzz. It's even been optioned for a feature film and is in pre-production.

One grand prize winner will receive:
Enter today by clicking the icon below. But hurry, the giveaway ends on October 19th. Winner will be announced October 20th at James Russell's blog, Love Story from the Male Perspective.