Whither Thou Goes by Anna Belfrage 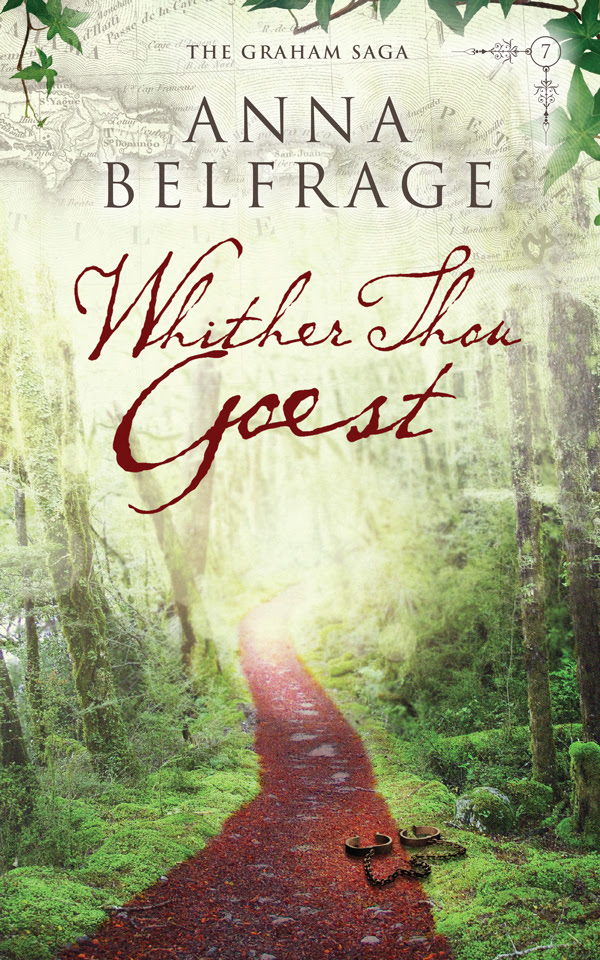 Whither Thou Goest is the seventh book in Anna Belfrage’s series featuring time traveller Alexandra Lind and her seventeenth century husband, Matthew Graham.

In their rural home in the Colony of Maryland, Matthew and Alex Graham are still recovering from the awful events of the previous years when Luke Graham, Matthew’s estranged brother, asks them for a favour.

Alex has no problems whatsoever ignoring Luke’s sad plea for help. In her opinion Matthew’s brother is an evil excuse of a man who deserves whatever nasty stuff fate throws at him. Except, as Matthew points out, Luke is begging them to save his son – his misled Charlie, one of the Monmouth rebels – and can Charlie Graham be held responsible for his father’s ill deeds?

So off they go on yet another adventure, this time to the West Indies to find a young man neither of them knows but who faces imminent death on a sugar plantation, condemned to slavery for treason. The journey is hazardous and along the way Alex comes face to face with a most disturbing ghost from her previous life, a man she would much have preferred never to have met.

Time is running out for Charlie Graham, Matthew is haunted by reawakened memories of his days as an indentured servant, and then there’s the eerie Mr Brown, Charlie’s new owner, who will do anything to keep his secrets safe, anything at all.

Will Matthew deliver his nephew from imminent death? And will they ever make it back home?

My review: I enjoy this series of books. Each one you read takes you on a new adventure. Anna does such a great job in her character development. They are all very strong and you feel as if you know them after reading the books. Another thing I enjoyed was the native American part of this story. That is one of my favorite things to read about. The twists and turns kept me turning the pages as fast as I could so I could see what was going to happen next. Reading about Alex and Matthew grown up is like listening to stories of your family. You can read this book as a stand alone but I know you will want to go back to read the rest of the stories. I look forward to the next book in this series.

Book One: A Rip in the Veil
Book Two: Like Chaff in the Wind
Book Three: The Prodigal Son
Book Four: A Newfound Land
Book Five: Serpents in the Garden
Book Six: Revenge & Retribution
Book Seven: Whither Thou Goest
Book Eight: To Catch a Falling Star (March 2015)

I was always going to be a writer. Now I am – I have achieved my dream.

Whither Thou Goest Blog Tour Schedule

Thursday, December 4
Review at Oh, For the Hook of a Book
Review at With Her Nose Stuck in a Book

Friday, December 5
Guest Post at Oh, For the Hook of a Book

Monday, December 8
Review at So Many Books, So Little Time
Guest Post at What Is That Book About

Tuesday, December 16
Review at Layered Pages
Review at A Chick Who Reads