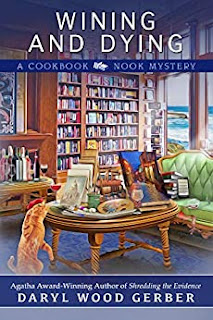 I received this book from the author.  All opinions are my own.
Wining and Dying by Daryl Wood Gerber
A Cookbook Mystery #10
Published: April 27th, 2021
Beyond the Page Publishing
Synopsis:
Crystal Cove is buzzing with the launch of its fifth annual Art and Wine Festival, when local wineries are paired with local artists to show off their latest creations. Jenna’s thrilled to be showing one of her own amateur paintings at the fair, but her excitement quickly fades when an up-and-coming artist is murdered. What’s more, all the evidence points to a good friend of Jenna’s as the culprit, and she’ll have to use all her wits to prove his innocence before he paints himself into a corner.

Certain that her friend is being framed, Jenna tries to blend in as she starts digging into an array of colorful suspects, including a tech guru with a penchant for stalking women, the mayor’s wayward son, and an older art instructor who might have been closer to the victim than anyone would have guessed. Jenna will have to wine and dine her way through all the clues before she can see the full picture and put the real killer behind bars—all the while avoiding her own brush with death . . .
My thoughts:
I enjoyed this book. Daryl is one of my go to authors as I enjoy her writing style. I also love the cast of characters in this series.  With each edition you feel like you are coming home to catch up with friends and family, of course I would not have to find a dead body on each visit. I liked the setting of the Art and Wine Festival, that would be fun to attend. There were a couple of people that I suspected as the killer with that being said I was kept guessing until the end.
Meet the author - Daryl Wood Gerber
SIGN UP FOR HER NEWSLETTER, which comes out once a month and with a new release
https://darylwoodgerber.com/contact-media/

ALSO FOLLOW HER ON BOOKBUB: http://bookbub.com/authors/daryl-wood-gerber so you'll get an alert whenever she has a new release, preorder, or discount!

Agatha Award-winning author Daryl Wood Gerber writes the bestselling COOKBOOK NOOK MYSTERIES, the popular FAIRY GARDEN MYSTERIES, and the FRENCH BISTRO MYSTERIES. As Avery Aames, she pens the bestselling CHEESE SHOP MYSTERIES. In addition, Daryl writes suspense, including the ASPEN ADAMS NOVELS OF SUSPENSE and stand-alone suspense thrillers, including GIRL ON THE RUN and DAY OF SECRETS. Fun tidbits: Daryl jumped out of a perfectly good airplane, and she hitchhiked around Ireland by herself. Also, as an actress, Daryl appeared in “Murder, She Wrote.” She loves to read, cook, and golf. She has a frisky Goldendoodle named Sparky who keeps her in line!
Posted by Angela - Bookaunt at Tuesday, May 25, 2021 No comments:

The Stepsisters by Susan Mallery 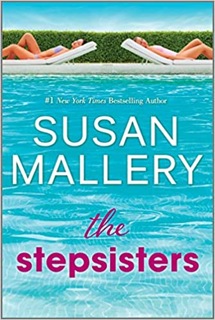 Once upon a time, when her dad married Sage’s mom, Daisy was thrilled to get a bright and shiny new sister. But Sage was beautiful and popular, everything Daisy was not, and she made sure Daisy knew it.

Sage didn’t have Daisy’s smarts—she had to go back a grade to enroll in the fancy rich-kid school. So she used her popularity as a weapon, putting Daisy down to elevate herself. After the divorce, the stepsisters’ rivalry continued until the final, improbable straw: Daisy married Sage’s first love, and Sage fled California.

Eighteen years, two kids and one troubled marriage later, Daisy never expects—or wants—to see Sage again. But when the little sister they have in common needs them both, they put aside their differences to care for Cassidy. As long-buried truths are revealed, no one is more surprised than they when friendship blossoms.

Their fragile truce is threatened by one careless act that could have devastating consequences. They could turn their backs on each other again…or they could learn to forgive once and for all and finally become true sisters of the heart.

Adam was taller than he had been in high school, and broader through the shoulders. He looked like he worked out.

She sat at one of the stools at the kitchen island as he measured tequila into a blender and added lime juice, simple syrup, orange liqueur and ice. While the blender worked its magic, he collected glasses from the freezer.

Less than a minute later, she had an icy margarita in her hand. Adam poured one for himself and sat next to her. He touched his glass to hers.

“To old friends.” One corner of his mouth turned up. “By that I mean friends who knew each other a while back. I’m not saying you’re old.”

“Good, because then I’d be forced to hit you really hard and as you wouldn’t hit me back, you’d be stuck.”

“You telling me I’m not allowed to hit a girl?”

She grinned. “I’m saying it’s not your style.” She wasn’t sure why she assumed that, but she did.

“Do you want to be able to hit women?”

“No.” He sounded shocked. “Why would you ask that?”

“And you prove my point.” She took a sip of the drink. “Nice. How did you know where I worked?”

“I’m surprised she told you.”

“I threatened to cut off her internet if she didn’t.”

“Only if I unscrewed the connection at the cable box, which is kept locked. So not easily. But I figured she would believe me.”

“And she did.” Sage swung her chair to face him. “Now you know where I work, what do you do?” “I put companies on the cloud.”

She thought about her phone and how it backed up when she plugged it in to charge. “That’s like off-site storage, right?”

“Sort of. Do you want a detailed explanation?”

He chuckled. “Good to know. Companies hire me to get them on the cloud. I’m an independent contractor, which is why I work from home.”

One eyebrow rose. “Looking for a loan?” He winced. “That came out wrong.”

She eyed him. “Yes, it did. I’m making adult conversation. It’s nice to have work you like that also pays well.”

He got up and pulled a bowl of guacamole out of the refrigerator, then emptied tortilla chips into a bowl.

“I have chicken taquitos I got from a little place I know, if you’re interested.”

He put several on a cookie sheet and set it in the oven, then started a kitchen timer in the shape of a tomato.

“Want to go outside?” he asked.

She nodded and picked up her drink, along with the bowl of chips. He brought the guacamole, his drink and the timer.

His patio was much larger than her mom’s, with Mexican pavers and a big covered area. Along with the desk where he worked, there were a couple of lounge chairs, a round table and four chairs. She took a seat. Adam settled across from her.

She turned her head and looked across the low fence. “Why do houses always look different when you see them from someone else’s perspective?”

She smiled, then squinted slightly at the rear view of her mom’s house. “Is that my bedroom?”

She faced him. “You can see into my bedroom?”

“I can and while I’m more mature now, I will admit that as a teenager, seeing into your bedroom was always the highlight of my night.”

She thought about how many hours she’d spent there, doing homework, talking to her friends, changing her clothes.

She swung her head between him and the window. “You were spying on me?”

“And desperately hoping you’d take off your clothes.”

His mouth twitched, as if he were trying not to smile. “Stare through your window.”

An honest man, she thought, knowing how rare they could be.

Something flashed through his eyes. “Not in a long time, but yes.”

“I’m not sure how I feel about that.”

“Flattered?” he asked hopefully. “You’re very beautiful. The next naked woman I saw was much less impressive. Of course she was interested in having sex with me, so she could have looked like a tree stump and I would have been delighted.”

“Are you more discerning now?”

“I am, and you still remain the standard against which all my lovers are judged.”

She winced. “Don’t do that. No adult woman should be compared with her sixteen-year-old self.”

The timer dinged and Adam went to get the taquitos. Sage wondered what quirk of biology and sociology created a society where women were valued for their beauty and men were valued for strength and power. She supposed it had something to do with procreation, but while it might have worked ten thousand years ago, it was less appealing now.

Monday, May 3rd: Book Reviews and More by Kathy

Tuesday, May 4th: Jathan and Heather

Friday, May 7th: The Lit Bitch

Monday, May 10th: From the TBR Pile

Tuesday, May 11th: What is That Book About

Thursday, May 13th: Romantic Reads and Such

Friday, May 14th: View from the Birdhouse

Monday, May 17th: Girl Who Reads

Thursday, May 20th: Why Girls are Weird

Saturday, May 22nd: A Holland Reads