Death at a Fixer-Upper by Sarah T. Hobart - Guest Post 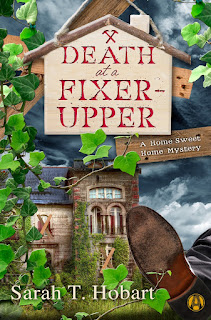 Newly armed with her real estate license, Sam Turner loves Arlinda, her quirky seaside hometown in Northern California. But life by the beach isn’t exactly a breeze: She and her teenage son, Max, are being evicted from their apartment, her long absent ex-husband unexpectedly resurfaces, and her possibly romantic relationship with sexy Chief of Police Bernie Aguilar is, well . . . complicated. All Sam wants is a quick and easy sale. What she gets instead is a killer headache—or three.

Sam’s trying to drum up interest in 13 Aster Lane, a rambling Victorian fixer-upper that’s more than a little neglected—and possibly haunted—so when a trio of offers arrive out of the blue, she can’t help thinking it’s too good to be true. But after a new client drops dead on the property, she fears she’s lost more than a commission. Before Sam’s out of house and home, she must unmask a killer targeting her clients, or the only property she’ll be moving will be plots—at the local cemetery.

About the author:
Sarah Hobart is a real estate agent and former newspaper reporter in Northern California, where she lives with her husband and two children in a majestic fixer-upper overlooking State Highway 101.

Praise for the book:
Death at a Fixer-Upper is a sassy and sarcastic page turner that keeps you guessing until the end…
~Laura’s Interests

I would have to say that Sarah Hobart has a way with words. The opening page set the mood and pace of the story and it just ran from there.
~I Read What You Write!

This is a fantastic new cozy series about a real estate agent (which sort of hits home since hubby is in that business).
~Storeybook Reviews

This cozy mystery is a little snarkier and steamier than some in the genre, which takes some getting used to, but the story is well-paced and the mystery is spot on.
~Reading Is My SuperPower 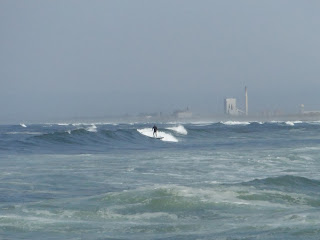 The Home Sweet Home mystery series is set on California’s North Coast, and when people hear “California” and “coast,” they automatically think soft ocean breezes, palm trees, lots of balmy sunshine, and miles of beaches with white sand so fine it ends up in all sorts of intimate and uncomfortable places.

But that doesn’t describe Arlinda, Sam Turner’s home town. To get there, you have to drive five hours north of the civilized world, almost to the state line but not quite as far as the maximum-security prison. When you see the setting sun dappling the bay and touching the Arlinda Waste Treatment Plant with gold, you’ve arrived.

Let’s talk about that “balmy” weather: to grow some of the world’s tallest redwoods, you need moisture, and lots of it. Rain? Better carry an umbrella from September to June, and it wouldn’t hurt to keep an inflatable raft in your car. The North Coast summer is like winter in most other places: cold and gray, cloaked in fog.

We do have beaches, though: miles and miles of them. They’re rocky and desolate and beautiful. And the surf is magnificent, towering waves that bite away at the shoreline and gobble up big chunks year after year. Hard to believe anyone would venture into the 40-degree water, but the local surfers do, togged out in four-mil neoprene wetsuits.

Sam Turner doesn’t surf—at least, not yet. She may be reckless and headstrong in a lot of ways, but she knows there’s more than hypothermia lurking in those cold gray ocean waves. In a word, sharks.

Just a few short years ago, a surfer off the North Coast was attacked by a great white. The shark pulled him under, took a mammoth bite out of his surfboard, ruined his wetsuit and left the poor guy with so many staples in his body he’ll never be able to make it past airport security again. But he survived—and yes, he told our local television newswoman, he’s going back out there!

See, that just doesn’t make sense to me. I saw “Jaws” in the seventies along with millions of others, and we came away from the theater vowing to stay out of any water not decently chlorinated as God intended. Why on earth would anyone choose to bob around in the great white’s soup bowl like a tasty seal-shaped cracker? Especially after one’s already taken a bite out of you? This is natural selection in action.

Of course, surfers are a unique breed. They’re wired in a way the rest of us aren’t. According to their philosophy, a bad day surfing is better than a good day of doing almost anything else.

I know this because my adorable husband, Mr. W, is a surfer. And he’s been after me to try it for years. He even went out and bought me a wetsuit. Finally, in a moment of weakness, I agreed.

It took three strong men who swore their eyes were closed to stuff me into the wetsuit, and after it was all zipped up I couldn’t bend from the waist and looked like a Teletubby. Mr. W lashed me to the roof of our VW bus and drove to the beach. “You’re going to love this,” he said as he rolled me onto the sand.

Over the course of the next hour, I swallowed six gallons of seawater, went head-first into the sandy bottom twice and peed in my wetsuit when a seal bobbed up twenty yards away. I was bruised and battered, and one particularly devilish wave drove my board into the top of my foot, which fortunately was numb from the icy water. But glory be, on my last run of the day I popped up at the right time, stayed on my feet and rode my board all the way to shore. Pretty sweet, indeed.

But I wasn’t converted. In fact, I developed a massive bump on my foot where the board had struck. When it got bigger than a half dollar and I couldn’t lace my shoe, I went to the local foot doctor, Dr. Tarsus.

He smiled condescendingly. “That’s a fancy name for a minor herniation of the tendon. I recommend we treat this surgically. You can schedule it at the front desk on your way out.”

I drove home and looked up the condition on the internet. One site told me I could reduce the hernia by striking it with a heavy object, such as a large book.

Well, we have plenty of books here. Webster’s New Unabridged Dictionary seemed like a possibility. Then I found Business Management Strategies and Practices for the New Millennium and I knew my troubles were over. I lugged the book to Mr. W. “Hit me,” I said.

“You have to. Right there on the bump.”

“This is your fault,” I told him in exasperation. “If you hadn’t dragged me out surfing against my will . . .”

That was the end of the cyst. But it was also the end of my surfing career.

Because in my opinion, those who don’t learn from history are liable to be eaten by it.