Book description
In Dorothy St. James’s third delectable Southern Chocolate Shop mystery, a new batch of chocolate and troubles of the heart cause a string of disasters for the Chocolate Box’s new owner, Charity Penn.

The vintage seaside town of Camellia Beach, South Carolina seems like the perfect place for romance with its quiet beach and its decadent chocolate shop that serves the world’s richest dark chocolates. The Chocolate Box’s owner, Charity Penn, falls even further under the island’s moonlit spell as she joins Althea Bays and the rest of the turtle watch team to witness a new generation of baby sea turtles hatch and make their way into the wide ocean.

Before the babies arrive, gunshots ring out in the night. Cassidy Jones, the local Casanova, is found dead in the sand with his lover Jody Dalton—the same woman who has vowed to destroy the Chocolate Box—holding the gun. It’s an obvious crime of passion, or so everyone believes. But when Jody’s young son pleads with Penn to bring his mother back to him, she can’t say no. She dives headfirst into a chocolate swirl of truth and lies, and must pick through an assortment of likely (and sometimes unsavory) suspects before it’s too late for Penn and for those she loves in Dorothy St. James’s third rich installment of the Southern Chocolate Shop mysteries, In Cold Chocolate.

Meet the author - Dorothy St. James
Mystery author Dorothy St. James was raised in South Carolina. She makes her home on the outskirts of Charleston, South Carolina with her husband, a neurotic dog, and a fluffy cat. Though writing has always been a passion for her, she pursued an undergraduate degree in Wildlife Biology and a graduate degree in Public Administration and Urban Planning. She put her educational experience to use, having worked in all branches and all levels of government including local, regional, state, and federal. She even spent time during college working for a non-profit environmental watchdog organization.

Switching from government service and community planning to fiction writing wasn't as big of a change as some might think. Her government work was all about the stories of the people and the places where they live. As an urban planner, Dorothy loved telling the stories of the people she met. And from that, her desire to tell the tales that were so alive in her heart grew until she could not ignore it any longer. In 2001, she took a leap of faith and pursued her dream of writing fiction full-time.

Penn thinks I’m nutty. But that’s okay. She doesn’t know what I know. She’s not seen what I’ve seen. I think she’s afraid to see it. There are forces at work in this world that mere mortals will never be able to explain. These forces—whether you call them magic or weird science—are my passion.

Can spirits talk to us from the great beyond? Can the vibrations in crystals heal our bodies and our spirits? Can this mystical vortex that exists right off the coast of Camellia Beach be the cause of all the troubles that Penn has faced since arriving to our small community? I think the answer is a resounding yes to all of these questions.

I own the local crystal shop on the island. Helping people find their way in this world is my calling. 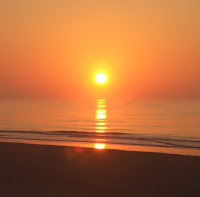 Penn doesn’t believe in any of that. Our relationship got off to a rocky start last year because she thought I was a swindler and a liar. Now she knows I’m neither of those things. She just thinks I’m delusional. And I think she’s closed herself off to a part of the world that could help her overcome the troubles and hurts that she wears like a cloak around her strong shoulders.

So, I’m sure you’re wondering by now how the two of us managed to forge such a close friendship. It was fate, of course. Fate put me in her path in order to remind her to look for the unexpected in life. And to enjoy it. I’m also here to remind her that, yes, there is magic in the natural world and that she doesn’t need to fear it.

I like to help her with those troubles I mentioned. (The murders that have plagued her shop.) Not in any magical way. Penn wouldn’t stand for that. But I make sure she knows I will always have her back. I help her suss out any clues that she might be overlooking. She wasn’t born in Camellia Beach and doesn’t know its quirks and eccentricities like I do.

It’s not a one-way relationship by any means. Just recently Penn helped me when it felt as if my world was falling apart. Just this season, I took over as head of Camellia Beach’s turtle watch team. We’re a group of volunteers who watch over the nests the sea turtles lay on our beach and make sure the baby sea turtles have the best odds of one day making their way back to our shores to nest here again. It’s a serious undertaking. Everyone on the island demand that the volunteers do their best. The sea turtles are our islands legacy and joy, after all.

So when the eggs started disappearing from the nests I was in charge of protecting, I felt as if my world was coming apart. Despite all the pressures Penn already had on her, she rushed to my side and offered all the support and time she could find.

You can read all about our adventures and how they might have ruined our friendship forever— though I dearly hope they didn’t; I’d miss laughing with her as we sipped our chocolate milkshakes—in the third Southern Chocolate Shop Mystery, IN COLD CHOCOLATE.