The Witch and the Dead by Heather Blake - Review 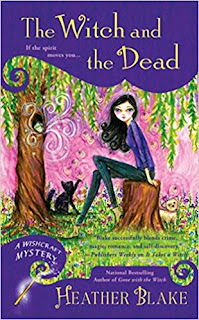 Book description
When Darcy moved to Salem, Massachusetts, she never expected her life to change as drastically as it did. But within a short time, the Enchanted Village has become her home, its mystical residents have become her family, and As You Wish, the personal concierge business formerly run by her Aunt Ve, has become her calling. Still, the time has come for change—and for Darcy to move out of Aunt Ve’s house.

Darcy’s belongings are stashed in Aunt Ve’s garage, alongside a mess of memories, forgotten possessions, and, to both Ve and Darcy’s horror, a pile of old bones. It turns out they belong to Ve’s long missing second husband. Now Darcy must unpack old secrets to solve a cold case—and make sure her aunt isn’t looking at a spell behind bars.

Meet the author - Heather Blake
Heather Blake (aka Heather Webber) is the author of more than twenty mystery novels and has been twice nominated for an Agatha Award. She's a total homebody who loves to be close to her family, read, watch reality cooking competition shows, drink too much coffee, crochet, and bake cookies. Heather grew up in a suburb of Boston, but currently she lives in the Cincinnati area with her family.

My thoughts
I love this series and this one was not a disappointment. I felt bad that a body was found in Aunt Ve's garage as I know that she could not kill someone. There were some real twists in this installment with some of the characters. I don't want to say who with so I don't give anything away. I was happy that Darcy and Nick are in one house now. The usual characters made appearances although I would have liked just a little more of Pepe and Mrs. P as they are two of my favorites. Of course you are shocked at how the murderer was in the end. Another fun book.
Posted by Angela - Bookaunt at Wednesday, March 20, 2019