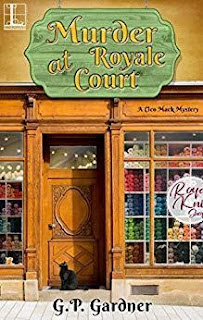 Book description
Harbor Village is a vivacious retirement paradise known for its beachy locale and active senior scene. But ever since murder moved in, the idyllic coastal community is becoming a little less lively . . .

With the first annual antique car show cruising into the tranquil bayside oasis of Fairhope, Alabama, there are bumpy roads ahead for Harbor Village director Cleo Mack. As an automobile-themed lecture series gets off to a rough start, she finds herself balancing one too many responsibilities—and dodging advances from a shady event sponsor. It’s enough to make Cleo feel twice her age. But the festivities reach a real dead end when she discovers a body at the Royale Court shopping center . . .

When an innocent man lands in the hot seat for murder, Harbor Village residents look to Cleo to crack the case. Aided by an eclectic group of energetic seniors, Cleo races to identify the true culprit from a growing list of harmless Sunday drivers—before a killer revs up for another hit and run!

Meet the Author
Born and raised in Alabama, G. P. Gardner earned BS and MA degrees in Psychology from the University of Alabama (Tuscaloosa, AL) and an MBA from Jacksonville State University (Jacksonville, AL). She also attended the University of Georgia (Athens, GA), where she studied biopsychology and primatology. But her heart belongs to Talladega College—an HBCU and the first educational institution in Alabama to admit students without regard to race—where she taught business. Her writing life began with short stories, some of which were published in regional literary journals and some of which won prizes. She enjoys the classic mystery writers as well as contemporary whodunits but reads widely. She is a knitter and once owned a knit shop in Fairhope, AL. She studied mystery writing with Terry Cline, another Fairhope resident. Murder in Harbor Village is the first in her series about social worker Cleo Mack. You can visit her at gpgardner.com.